Those who have a generator and a well in their backyard don’t have to worry, but for the rest of us, the security of the gas, electricity, and water infrastructure can be of life-and-death importance.

Every country has plans to prevent that infrastructure from being compromised but it is in the nature of such plans that it is hard to get people to say much about details.

“We feel that the topics you describe are extremely sensitive and best kept out of the public domain,” said one security manager.

Two developments have sharpened the focus on the risk utilities face: the 9/11 attacks and subsequent terrorist incidents, and the increase in extreme weather.

Stefan Mikus, who analyses energy infrastructure risk for the German government’s Federal Office of Civil Protection and Disaster Assistance (BBK), says that awareness of natural catastrophes has increased in the last ten years.

He lists the major flooding of the Elbe river in 2002, a widespread breakdown of the electricity supply in Italy in 2003, and a six-day blackout in the Münsterland – the result of ice and storms bringing down pylons over a large area of north-central Germany – in 2005. At the extreme end of the scale, there are the effects of the 2011 earthquake and tsunami to the Japanese electricity grid.

“Münsterland was analysed very intensively and it taught us a lot,” says Mikus.

“Both the electricity companies and the authorities learnt a great deal.”

He’s sure that a similar catastrophe today would have far less effect and take far less time to recover from.

Buster Brown, Emergency Planning and Security Manager for South West Water in the UK, points to June 2007, when floods affected wide areas of the country, as a major turning point.

“After that, we had the Pitt report which made 98 recommendations, and the government has adopted almost all of them. It’s a fairly robust process now,” he says.

The procedure involves regular meetings between the various agencies involved.

“There’s a real collaboration now. The government listens to what we have to say; they take appropriate solutions on board and produce legislation if necessary,” adds Brown.

But who knows where the next threat will come from?

A recent epidemic of a virulent strain of E. coli bacteria in Germany was eventually traced to infected fenugreek seed sprouts.  But the hunt for the source took a long time, and left plenty of opportunity for speculation – for example, that the bacterium could have been deliberately planted in the water supply with which the sprouts were watered.

The big water companies practically exclude that possibility as any outside contamination would be detected where the water enters the treatment plant.

Frank Blaha, Senior Research Manager with Water Research Foundation, an international non-profit organisation based in the US, doesn’t exclude attacks within the system.

“The likelihood is low, but it’s not zero,” he says.

Most customers in the US, Britain or Germany receive their water from the big suppliers, but some smaller towns have their own springs, and farmers may use their own boreholes.  When the German press was considering the risk of deliberate bacterial contamination, it was noted that smaller towns and villages might indeed be more susceptible.

One difficult issue for utilities is that much of their infrastructure is remote and widespread. It’s relatively easy to see where the risks might be in a nuclear power station or a water pumping work, and it would certainly be obvious if one of them came under attack, but it’s harder to keep track of a remote power-line crossing a distant mountain.

“You can’t prevent everything,” he says.  “It’s necessary to plan for recovery as well as prevention.”

That may mean, for example, water companies collaborating to support each other if one is compromised.

But dealing with the breakdown once it has happened is only one aspect of risk management, which, says Blaha, has now become a focus of the larger water companies his organisation represents.  Especially on the US West Coast, earthquake resilience has become a major issue, and studies are underway to analyse how far the water industries in Japan and New Zealand succeeded in maintaining their performance criteria after their recent earthquakes.

In the German BBK, risk management is seen as “the other side of the coin” of disaster management.  They’ve adopted an “all-hazards approach”, requiring an openness to the wide range of possible risks, and an analysis of what can realistically be prevented.  Such an approach also emphasises the common aspects of many risks, so that they can be better dealt with when they occur.

But risk will always remain.  In some cases it will be because a particular eventuality is seen as so unlikely that it is not considered economic to do anything against it.  Brown notes there was a tsunami in western England several hundred years ago, but the chances of another are seen as so small that protecting infrastructure against a tsunami is not a priority.

BBK is engaged in analysing possible future risk: not only does Mikus expect climate change to result in more frequent and more severe weather incidents, he’s also looking at risks which have so far scarcely been considered, such as the possible effects of geo-magnetic storms on electrical networks. Perhaps they won’t matter, but we need to find out.

More important are the risks not yet foreseen.

“No security is 100 percent – there are always unknown risks; the skill is in identifying and mitigating as many risks as possible,” says Brown.

“You have to allow for the unknown, and that way, when it comes, you can react much more quickly.” 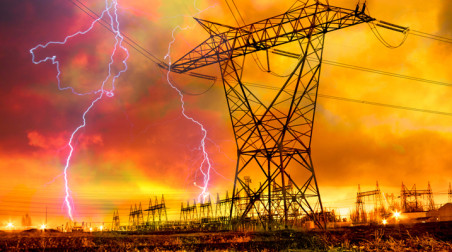