Retail losses from theft – both internal and external – are staggering. Protecting goods must be a top priority for retailers, according to loss prevention and security experts.

Results from the most recent National Retail Security Survey released by the National Retail Federation in Washington, D.C., show that retail losses in 2010 cost U.S. retailers an astounding 37.1 billion dollars. That’s up from USD 33.6 billion in 2009. Employee theft is the leading cause of retail shrinkage, accounting for 43.7 percent of total losses in 2010.

“Part of my job is to reduce temptation”

“We spend a lot of time, energy and capital on monitoring employee activity,” says Tina Sellers, vice president of loss prevention for Gamestop, the largest retailer of video games and entertainment software with more than 6,500 stores around the world.

Background checks and monitoring equipment, such as cameras, at the point of sale or cash register, are just some of the tools loss prevention professionals utilize. “Part of my job is to reduce temptation,” she adds.

Loss prevention professionals do more than keep goods guarded. When dealing with high-end merchandise, such as expensive electronics, there is often the urge to keep everything under lock and key, but doing that can reduce sales.

At Gamestop, analysis shows that some expensive products can be displayed out on their sales floors, not locked up. “In some cases, the increased sales that result from having a physically accessible product far outweigh the reduced theft of locking those items away,” Sellers points out.

The work of both loss prevention professionals and security experts has evolved in order to meet the new challenges posed by advancing technology. Fred Tarasoff is one of Canada’s foremost experts in retail loss prevention and has more than 25 years experience in retail. He has conducted interviews with shoplifters to learn the tricks of the trade.

“Now, with various auction houses online, it’s much easier. That’s a huge issue for the industry.”

“Before the Internet, the method of fencing stolen items was so different,” Tarasoff says. “You could steal things, but you had to sell them to friends or in a bar or at a flea market. Now, with various auction houses online, it’s much easier. That’s a huge issue for the industry.”

At Gamestop, a cyber investigations manager is now employed to help track potentially stolen goods and monitor fraudulent activity on the company’s website, such as ordering online with someone else’s loyalty card number. “That is a position that did not exist two years ago,” Sellers says. “But when the Internet exploded, crime exploded.”

Technology is also enabling small time shoplifters to exchange ideas and methods for getting around store security, says Tarasoff. By turning to the Internet, Tarasoff learned how to spirit goods out of a client’s store, past security. This was to illustrate the weaknesses in the system. “There are resources online to make shoplifters much more sophisticated,” he says.

Instant communication through text messages also plays a role in the latest type of retail theft: Flash robs, when a large group of individuals coordinate a time to storm a specific retail location, grabbing everything that they can and fleeing. Text messages can also warn shoplifting partners or signal them to initiate a distraction.

But just as technology has created new challenges in retail loss prevention, it is also providing new opportunities for protection. As thieves become more sophisticated, so too are the tools to stop them.

If the video software feels that a customer standing in a particular area for a certain amount of time could constitute a potential theft, it will alert the operator.

Mike Jackson is a consultant with Security Research Group, a California-based security and safety management consulting firm. He cites intelligent video surveillance, a form of video analytics that detects movement in live or recorded video, as an example of the new technology.

Intelligent video surveillance systems operate on specifically programmed rules, so, if the video software feels that a customer standing in a particular area for a certain amount of time could constitute a potential theft, it will alert the operator. “Since this technology is independent, it doesn’t require as many people to monitor it so you reduce costs and boost productivity,” says Jackson.

Digital IP cameras, with streaming that can be accessed from anywhere, are also revolutionizing in-store security, while cloud technology is providing more flexible storage of data. Facial recognition cameras are also new tools in the fight against shrinkage. Programs can identify previous shoplifters from a database when they come into view and trigger an alarm. But this is an expensive technology, Jackson adds.

But the cost of new technology can hamper loss prevention professionals, says Sellers. “A common wish in the loss prevention industry is for RFID technology to no longer be cost prohibitive,” she says. “Affordable RFID technology, for example, would give us the ability to track inventory from intake at the warehouse all the way through the point of sale.”

CPTED, or crime prevention through environmental design, can teach business owners how to set up their environment so that it is less attractive for thieves.

For smaller retailers with a limited budget for security technology, there are cost-effective ways to prevent loss. CPTED, or crime prevention through environmental design, can teach business owners how to set up their environment so that it is less attractive for thieves. CPTED principles might suggest establishing clear sight lines or restricting the flow of human traffic so that potential thieves would be directed to an area with a surveillance camera.
There is no doubt that evolving technology has brought with it new challenges in loss prevention.

But what comes next?

Sellers predicts that one new hurdle for monitoring staff will come as customers demand higher levels of service, such as on-the-spot checkout, where staff carries a portable payment device and customers can pay for purchases at any location in the store. “In that situation, the employee is not standing in one place where I can view and watch the transaction. That is what’s coming for all retailers, and we’re going to have to get ready for that. You’ll have to watch the whole store, not just the register.”

In that situation, the employee is not standing in one place where I can view and watch the transaction.

Unfortunately, says Sellers, while retail theft often rises in a tough economy, it is also a difficult time to convince businesses of all sizes to invest in effective loss prevention and security. “As the economy gets worse, it can look very easy to cut back on loss prevention and our big challenge is to do more with less,” she says. “Loss prevention is like a standing army. I need my army, my cameras and my tools, to intimidate the other side into not doing the bad thing. My job is to help people stay out of trouble.” 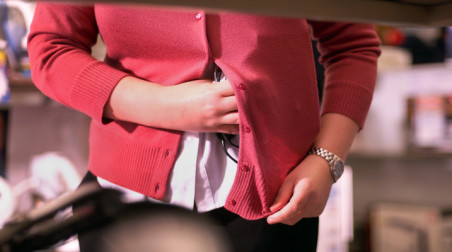