The greening of retailers

Environmental awareness and energy savings have become a priority for many retailers, who are starting to rethink such things as an open-door policy.

Five years ago, a group of friends in Cambridge were discussing why the emphasis on UK energy efficiency was limited to the residential sector. It was winter and snow was melting on the street outside a high street store with its doors wide open.

It was winter and snow was melting on the street outside a high street store with its doors wide open.

“We’d never heat our homes and leave the door open,” says Jeannie Dawkins, one of the friends, “but we were blind about it happening in shops.”
They commissioned research from Cambridge University which showed that keeping doors open caused significant energy loss – up to 50 percent of total energy use. “The cost of this waste ultimately ends up on the price of goods,” says Dawkins.

The Close the Door campaign works to stop shops wasting energy by keeping their doors open when using heating or air-conditioning.

The Close the Door campaign began and has since gained the support of retailers of all types and sizes from Tesco and Marks & Spencer down to independents – also winning Best Campaign at the Climate Week 2012 Awards.

“It’s gathering pace,” says Dawkins, now campaign director, “but it seems extraordinarily slow: it’s easy and obvious – and evidence from the thousands of shops in the campaign shows that there is no downside for business.”

Some retailers obviously do think there is a downside: even companies which sell themselves as being environmentally active, like Body Shop or Lush, leave doors open, because they think that an open door will encourage people to come in.

One of the recent converts to Close the Door is the Costa Coffee chain. Oliver Rosevear, energy and environment manager, says, “Research has shown that there is no change in the number of customers entering a shop with closed doors.”

After all, with the door closed, it’s not freezing cold near the front, and overheated at the back.

“We will continue to challenge our door manufacturers and installers to improve the operability and longevity of doors to ensure ease of access”.

But the new policy is a challenge. Rosevear says Costa Coffee feels the introduction of automatic doors would “increase electricity demand,” which would be at odds with Costa’s ambition to reduce carbon emissions. That means staff may need to help customers if they want to sit outside with their coffee. “We will continue to challenge our door manufacturers and installers to improve the operability and longevity of doors to ensure ease of access,” adds Rosevear.

In the US, where many more stores are located in malls, the issues are different. Doors are usually kept open and Joshua Witte, director of industry programs at the Professional Retail Store Maintenance Association notes that “there are often challenges in the landlord-tenant relationship that can prohibit cooperative efforts.” Stores may have corporate policies about temperature which can be different from those of the mall operator: “Common areas may be cooler or warmer than stores, and air pressure in stores and outside may be different, leading to an unwanted exchange of air,” Witte says.

Outside malls, controlling doors properly is an important element in operating an energy efficient store, and it’s a central element in a new eco-supermarket built by Billa, an Austrian subsidiary of the REWE Group.

The issue for such a market is not so much cold air coming in from outside, as the loss of cold air from the freezers and refrigerated displays. Sixty percent of the electricity used in the average Billa store goes into cooling.

Conventional metal-framed doors have to be heated to prevent them from freezing closed, so these doors are framed in plastic.

“When the air in the store is still,” explains Peter Breuss, Billa’s technical director, “there’s not much loss, but as soon as there’s movement in the store, cold leaves the freezers.”

That meant, for a start, putting doors on all the freezers. But conventional metal-framed doors have to be heated to prevent them from freezing closed, so these doors are framed in plastic. And conventional neon lights work very inefficiently in cold temperatures, so the lights are all LEDs.

Then there’s a lobby, to prevent air from outside coming in directly every time the door opens. And the automatic doors themselves are fitted with the very latest technology: Peter Breuss, Billa’s technical director, points out, “We have better seals and insulating glass, and the doors open for less time. And the radar doesn’t just respond to movement; it recognizes direction and speed.”

That means the radar can tell the difference between someone walking decisively towards the store and someone just walking alongside the building, so that passers-by do not trigger the door. Although the store has an air curtain to blow warm air at the entrance, it’s used very little, since the lobby and the automatic doors do enough to keep the cold out.

At the other end of the supermarket, the doors to the warehouse space at the back are also carefully designed to prevent heat loss (and unauthorized access). Breuss says they now use quick-opening doors operated by an RFID card, so that only staff have access.
This is a showcase project, and many of the ideas here will go on to be used elsewhere. “It’s important for us to have big glass surfaces at the entrance to attract customers,” says Breuss, “but that could lead to overheating, so we have a porch to shade the entrance, with skylights bringing in light from the north which shines into the inside of the building.”

“We think it makes sense in the long term.”

And, of course, there are solar panels on the roof, and charging points for e-cars and e-bikes in the parking lot.

And while it takes more than doors to make an environmentally friendly store, inefficient doors can undo a lot of the good that is being achieved elsewhere. “In addition to the money we might save, it’s also the psychological effect of the greater comfort for customers and staff,” says Breuss. “We think it makes sense in the long term.” 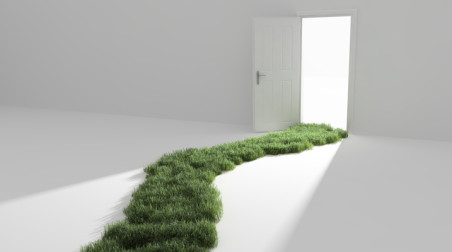