Mobile phones are second nature to today’s students which is why security and NFC mobile phone applications are making their way to campuses worldwide.

On modern university campuses, mobile phones have become as common as textbooks and stressed students.  So, with a cell phone in every student’s hand, it makes sense that technology and mobile applications are popping up to help students get around campus – and stay safe doing it.

A host of campus security mobile applications are making their way onto the market. Josh Sookman is CEO of Guardly, a technology startup based in Toronto, Canada. Guardly has developed the Safe Campus Program, an internet-based service for campus security, students and faculty. Users can launch an application on their mobile phones that can notify up to 15 people, including campus security and relevant authorities, of an emergency situation.

“This service dramatically decreases the amount of time it takes first responders or secondary responders to get to you in an emergency,” says Sookman. He points out that many universities feature emergency poles, areas where students can press a button and be connected to security services. While those security poles serve a purpose, Sookman says that they have limitations. For example, in an emergency, you may not be able to stay in one place and wait for help.

“What we’ve done is virtualize those emergency poles and put them in the hands of students and faculty,” says Sookman.

In addition to such mobile phone applications and web-based solutions, Near Field Communication (NFC) technology is also shaping up to play a role in campus security.

NFC is the short-range, high frequency wireless communication technology that enables the use of a mobile phone for making purchases, opening doors and much more. The technology, which offers a higher level of security than magnetic stripe technology, is also suitable for bank payments.

University campuses around the world are exploring the benefits of NFC applications. At L’Université Nice Sophia Antipolis (UNS) in Nice, France, the “Nice Future Campus” project included mobile services such as allowing students to touch an NFC tagged target on campus to view their route to class, make mobile payments for the university restaurant and vending machines or find the location of a book within a library. The project, which involved about 100 students, was held in early 2011. The “Nice Future Campus” consortium included seven partners: BMS, Orange Labs and ASK, among them.

“This project is about using the ubiquitous device, the mobile phone, and embedding the students’ credentials into that phone to open doors,” says Director of Business Applications and Fiscal Control at ASU, Laura Ploughe. “Our goal in this pilot was to engage our students using a device they already bring to campus, instead of forcing them to use a technology or services that might not be of their generation.”

Putting NFC into the hands of students will push the technology to the forefront, she adds.

Ploughe foresees many other applications for NFC on campuses beyond access control, including payment at university dining halls and vending machines and accessing grades.

“NFC on campuses is all about the future,” she says.

But how far off is that future?

Charles White is Senior Vice President at TNS, a global market research company. He predicts that the trend of expanding NFC on campuses like the trials at Arizona State and UNS in France will continue, but adds: “the market is still technically putting its toes in the NFC waters.”

White continues: “This is sort of like when the digital video recorder came on the market in the early days. People would say they already have a VCR or DVD player, so why would they want a DVR? It doesn’t mean the technology isn’t going to develop, it just means there are some more hurdles in terms of attitudes.”

But, he predicts with a laugh, the minute Apple decides to launch an NFC-enabled phone we can expect the industry to really take off. Blackberry, Samsung, Nokia and HTC are among those who have already launched NFC phones.

Ploughe believes that the widespread use of NFC applications on campus is inevitable and ASU wants to be prepared for it.

“As the NFC industry builds standards and as those standards grow into a truly viable business case that can be proven, I think the rest will take care of itself. It’s just a question of when.” 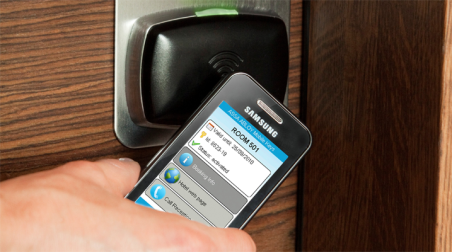