Human beings are the weakest link in supply chain security, but solutions using RFID and GPS offer interesting options for the future.

Whenever times are tough, when there’s an economic downturn or political instability in a country, supply chain experts – and the police – can see an increase in different kinds of attacks on cargo in transit.

“Supply chain security deals with all kinds of man-made attacks, such as counterfeiting, smuggling, theft, or terror attacks,” says Luca Urciuoli, Ph.D, and an expert in technical logistics at Lund University in Sweden.

The times are tough now, he says.

“If a seal is breached or a container is stolen, an instant alert is sent to a security team that will immediately contact the legal authorities as well as traders involved in the shipment”.

Several technological solutions are available. There are different kinds of tracking methods – GPS navigation, RFID tags – that allow users at any time to see where a shipment is, and there are electronic seals. “If a seal is breached or a container is stolen, an instant alert is sent to a security team that will immediately contact the legal authorities as well as traders involved in the shipment,” says Urciuoli.

These technologies are not meant to hinder an attack against the cargo, but rather to detect and facilitate recovery operations, he points out.

“We have simple but effective security measures on our containers, but we don’t use high-tech tags or anything like that” says Lars Lorenzen, head of Security at Maersk Line, a division of the A.P. Moller – Maersk Group.

“We’ve looked into it, both on our own and as a part of an industry-wide endeavor. Especially RFID looks like something that could help us, and the main issue is not technical, it’s the implementation. If RFID is to be effective on a container level it needs to be introduced throughout the process, at truck yards, airports, shipyards, inland depots, and container terminals, and it has to be hooked up to a common network using common technology,” Lorenzen adds.

That’s a major investment that Maersk hasn’t been willing to make just yet. Not when the shipping company’s high-security bolt seals do the trick.

“Let’s say that we want to put a radio frequency tag on a container. We would then also need readers at terminal gates along the entire transport network to follow the shipment and communicate the information to the traders. A data system like that would need to be integrated with the legacy systems of the companies that own the terminal,” Urciuoli says.

The technology has to be something that’s widely accepted by your partners, he adds.

“I think it’s very unlikely, unless there is a sudden governmental push for that. Such pressure would have to come from the EU Commission, or the US or China,” he says. “There are too many practical obstacles, like the fact that we use each others’ containers. Many of the players in our business are afraid of the possibility that we’ll have to start retrofitting containers.”

And so far, the benefits haven’t justified the investment in new technology for Maersk’s  container shipping lines. “Right now, it’s hard to see a clear-cut business case for it,” says Lorenzen.

Urciuoli points to some technical challenges. “With RFID, the big issues are costs and data standards, and with GPS devices, the challenge is to solve the battery life and anti-jamming issues – and make the devices smaller and cheaper,” he says.

“We’ll get there in a few years,” Urciuoli adds, saying that research into such things as energy-harvesting devices will offer feasible solutions in the future.

As with any arms race, the race between the shipping companies and the people trying to intercept the transports never ends. Even with a high-tech tracking device, things can, and do go wrong.

“In a recent gold transport case, a highly secured container arrived in Belgium from Italy with gym weights inside. They only realized there had been a robbery when the container arrived at its destination,” says Urciuoli.

Despite all of the current challenges, Urciuoli expects to see some technological solutions finding their way onto containers and pallets in the future, because we humans are the weakest link in the chain.

“Employees can be persuaded, hijacked, or blackmailed by the criminals to move the cargo and security guards could be insiders,” says Urciouli. “The challenge is achieving transportation and security operations that are fully automated.” 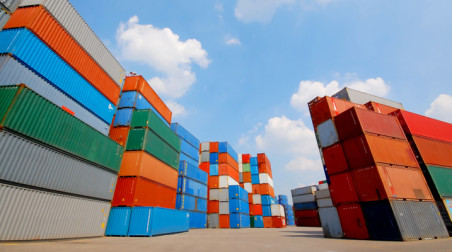