An appealing blend between staying in a hotel and owning your own home, timeshare holidays are growing in demand. How do they handle security challenges?

An increasingly popular vacation form is timesharing, a form of ownership in which multiple parties hold rights to use the property, and each sharer is allotted a period of time. These properties are typically resort condominium units.

American timeshares had higher occupancy rates than hotels (in 2011), according to an Ernst & Young study. Timeshare sales held steady with a slight increase from the previous year and an occupancy rate of nearly 80 percent, compared to a 58 percent occupancy rate for hotels.

“People are still making budget-conscious decisions when it comes to travel, which is why the value proposition of timeshare products is so appealing to our approximately 8 million owners,” says Howard Nusbaum, president and CEO of the American Resort Development Association (ARDA).

Timeshare properties, also called “fractional ownership” or “holiday clubs”, share the same issues in terms of safety and security, with a large number of people who come and go, and with owners who need to feel that their investment is safe and secure even when they’re not present 51 weeks of the year.

“Given the number of people we have going through, with over 400,000 timeshare owners plus people who rent from us, controlling access is extremely important. “

At Marriott Vacations Worldwide, one of the world’s leading timeshare operators, Senior Director Global Safety and Security, Ray Wood, highlights the importance of access control:
“Given the number of people we have going through, with over 400,000 timeshare owners plus people who rent from us, controlling access is extremely important. Once the guests are inside the property they should be able to do pretty much whatever they like and enjoy themselves.”

At Marriott, all timeshare resorts operate manned check-in at least three days a week, and the staff activates key cards for the designated visiting period. “We also use cameras to monitor visitors in order to add further security and to see who is coming and going,” adds Wood.

Marriott has abolished traditional keys in favor of access cards, and is currently in the process of switching from magnetic stripe to RFID cards.

While Wood believes that Marriott’s access systems are sufficient for its needs at the moment, he argues that security is an area where you can never sit back and rest on your laurels. “Security is not something you design and then walk away from,” he says. “You have to continuously update and observe it. The criminal elements are always coming up with new solutions for getting around security measures.”

In order to remain one step ahead, Marriott starts from scratch in designing its properties with security in mind. “One of the principles used by our architects is ‘crime prevention through environmental design’. One example is lighting in public areas, where a rule of thumb is that the light should be bright enough to allow you to read the newspaper in the dark,” says Wood.

It’s what we call concentric circularization of the security.

Marriott offers over 50 timeshare locations in North America, the Caribbean, Europe and Asia, and some destinations are obviously more prone to crime than others. How does Marriott handle security in those cases?

“We use our human assets in addition to the card keys, we look at gating, we install more cameras and we would make more use of card access inside the property, such as for elevators. It’s what we call concentric circularization of the security,” says Wood, who stresses that no matter how sophisticated the technology becomes, human beings are still the most important element for security and safety.

“You can put up all the barriers you want but at the end of the day, security depends on the staff to operate and understand the systems protecting the public.”

“Since timeshare owners have a significant investment in the property, they are more prone to action such as reporting safety and security issues than ordinary hotel guests. “

Consequently, educating the staff is important and Marriott offers training in 23 areas, from how to handle trespassers to dealing with active shooters. Also on the curriculum are securing guest safety and interacting with the law enforcement community and the fire brigade.  In addition to the staff, guests also contribute, explains Wood: “Since timeshare owners have a significant investment in the property, they are more prone to action such as reporting safety and security issues than ordinary hotel guests. They value their security more.”

Unlike Marriott and other large-scale operations, smaller properties may not always have the benefit of manned receptions to handle access control. New concepts and technologies, however, put secure and cost-effective solutions within reach of small-scale operations too, says Gard Gabrielsen, global director of product marketing at VingCard Elsafe, a part of ASSA ABLOY’s Hospitality division.

Upon arrival, the owner holds his card against the lock, which transfers data concerning the details of the owner’s stay at the resort to the smartcard, which then functions as a key card for the designated period.

“One access solution uses RFID-based smart cards (loyalty/ownership cards) that communicate with the timeshare unit’s lock. Upon arrival, the owner holds his card against the lock, which transfers data concerning the details of the owner’s stay at the resort to the smartcard, which then functions as a key card for the designated period.”

The intelligent lock, which contains a micro-processor, also communicates in real time with the timeshare operation’s server and verifies that the owner/visitor checks in and out. Another new concept uses NFC (Near Field Communication), allowing a smartphone to communicate with an intelligent lock to transfer data that permits access for the designated period. 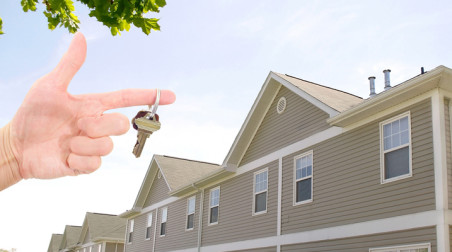