The Internet, wireless communication and mobile phone cameras have put cheating within clicking distance for students. Schools are responding with increasingly sophisticated technology, but experts say that promoting academic integrity may be a better solution in the long run.

No gum allowed – the chewing could potentially disguise the heavily supervised person speaking into a hands-free phone to an outside accomplice. The computer is recessed into the top of the desk so that any attempts to photograph the screen and later pass on the information, is easy to spot.

As soon as the supervisor sees something suspicious, he records the supervised person’s work at the computer and directs an overhead camera to zoom in. Both sets of images are burned onto a CD for evidence.

A maximum-security interrogation room at the CIA? No, a scene from the testing center at the University of Central Florida. To combat the apparently growing incidence of cheating, many schools resort to what some feel are extreme measures.

Surveillance and extremes measures, however, may not be the best long-term strategy to combat cheating, argues Dr. Teresa Fishman, director at the International Center for Academic Integrity, Clemson University, South Carolina:  “It sets up an adversarial relationship between students and teachers. It is better to nurture the fact that they are partners in learning.”

Dr. Fishman adds that if schools use sophisticated technology to combat cheating they will always find that the students are one step ahead of them. “For every new barrier you put up, they will find a way of circumventing it,” she says.

But who can blame educators when studies indicate that the problem is real and growing? Earlier this year, the Josephson Institute of Ethics surveyed 43,000 high school students across the US and declared that, “Rampant cheating in school continues.” A majority of students (59 percent) admitted cheating on a test during the last year, with 34 percent doing it more than two times. One in three admitted they used the internet to plagiarize an assignment.
And the problem is certainly not confined to American high schools. Where there’s modern technology, there’s cheating. Even such a prestigious temple of learning as Britain’s Oxford University is worried. The university’s proctors, Nick Bamforth and Colin Thompson, told The Telegraph of cases where students had lifted entire passages from the internet and from the work of fellow students and pasted them straight into their theses.
A report released this year showed that universities across the UK recorded more than 17,000 incidents of cheating in 2010 – a 50 percent rise in four years. The survey of more than 80 universities found that academic misconduct is soaring at institutions across the country, with thousands of students caught plagiarizing, trying to bribe lecturers and buying essays from the internet.

Dr. Fishman agrees that cheating and plagiarism is a mounting concern with schools around the world, but doubts whether cheating really is on the rise – or if it’s just the perception of it as a problem. “As is the case with police efforts to catch speeders, the more you patrol traffic the more speeders you will catch, but that doesn’t necessarily mean there are more offenders out there,” she says. “I am not convinced that there is more cheating going on than in the past, we just have better ways to detect it.”
Even though there are technological ways to fight cheating, Dr. Fishman recommends that schools discourage cheating by other means. “The best way is to develop a sense of academic integrity and engage students in their own learning,” she says. “They are not just there to receive a degree. Once that is understood, the incidence of cheating goes way down.”

The role of the teacher has changed, yet the format hasn’t always kept up to meet the needs in the 21st century, she argues.

“Students used to come to school because that was where the knowledge was, in the form of books and teachers. Now the information is available everywhere. Teachers need to teach students to sift through contents and discern quality information,” she says. “They must do more than just ask questions to which the answers are ‘googlable’ and require no synthesis.”

Even companies that make money from helping schools fight plagiarism admit that pre-emptive methods may be preferable.

Urkund is a system for plagiarism control used by schools across the world and developed by Swedish company PrioInfo. “We prefer to see our system as, above all, a tool for plagiarism prevention,” says Product Manager Peter Witasp.

Currently vetting some 10,000 documents every day, Urkund scans student-submitted texts in most of the world’s major languages, analyzes them against the contents of a large number of sources and databases – from the Internet to libraries and journals – and indicates similarities between the student’s work and already published texts.

Witasp points out the importance of intercepting cheating at an early stage. “Catching cheaters is actually doing students a favor in the long run,” he says.

Another area where cheating can occur, concerns identification and verification of students in relation to testing and e-learning. Today, most universities physically check student ID cards in test rooms. As campuses get bigger and more anonymous, more sophisticated types of technology, such as biometrics, might be required for accurate identification.

When it comes to verification of student identity in the case of electronic submissions of student works, Witasp says the company identifies students strictly by their e-mail addresses.

“But the identification of the actual submitter is not the problem,” he adds. “When students are working independently at home, you can only trust that they are doing what they are supposed to do.” 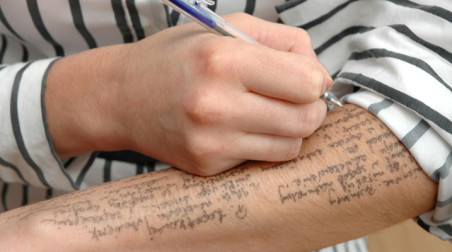