Safe for – and from the public

Achieving adequate levels of security in public facilities often means treading a fine line between granting taxpaying citizens their constitutional right of access, without compromising the security and safety of visitors and public officials.

Public security is a field that has received more attention over the last decade, according to Michael L. Plumb, security manager at the City of Columbus, Ohio. “The 9/11 events formed a watershed to public security. Before that time, you could just walk into an airport and hop on a plane,” he says. “It was an open country.”

Compared to most private companies, cities and municipalities often run a much wider spectrum of operations, from schools, libraries and sports facilities to courts and utilities. These public facilities are there to serve the public and the staff has to interact with people from all walks of life.

“The 9/11 events formed a watershed to public security. Before that time, you could just walk into an airport and hop on a plane,” he says. “It was an open country.”

Some professions, like teachers, social workers and librarians, are more vulnerable than others, and have the added pressure of handling a larger number of cases and patrons often on dwindling budgets.

“As we became busier over the years with more users, security concerns grew,” notes Warren Graham, a North Carolina-based security consultant and author of The Black Belt Librarian: Real World Safety & Security. “There were more people coming by the library, while rushed because of personal time constraints, and they would tend to want things their way and immediately. More homeless and mentally ill came to the library and, in many cases, they simply had nowhere else to go.”

“It’s hard to find a blanket security solutions that fit the needs of such diverse operations,” says Richard Buske, head of security at the Sollentuna Municipality, north of Stockholm, which owns some 100 properties. “We use different security technologies depending on the specific needs of the facility. We undertake detailed risk and vulnerability analyses and tailor security measures to the results.”

Some municipal facilities require higher security: “The courts are the city’s most vulnerable spots and present the greatest need for protection in terms of metal detectors, X-ray machines, card access and screening, with distraught people coming in from various incidents,” says Plumb. “You’re dealing with criminals in an open area, and with their relatives and friends, and victims too at the same time – so a lot can happen. Plus you’ve got the elected officials in there, the judges and everyone else that needs protection.”

“I am a big believer in cameras,”

Barring people from entry, like a private company can do, is obviously no solution. Instead, many municipalities have to rely on surveillance cameras and the like to prevent mishaps.

“A camera in itself has a deterring effect,” says Plumb. “Unlike in stores, where cameras are tucked away, municipal facilities need to show that the cameras are there. Our neighborhood watch cameras are placed in big white boxes with the local police emblem on the side.”

“I am a big believer in cameras,” Graham agrees, “and the entrance and exit should be adequately covered. If someone is ejected, their photo can be captured from the DVR and all staff know who is not allowed in the building. If someone would walk out of the library with a child, their image could be shared immediately with the police. The seasoned behavior problem patron notices cameras which is often a big deterrent.”

For maximum usefulness, the cameras obviously need to be integrated into a system that includes servers, software, monitors, alarm centers, and locking and access systems.

In taking this concept a step further than most cities, Columbus was hailed as a “role model for municipality security” following its recently concluded unification of access control for city buildings into one centralized location. The unification of dozens of city facilities under one IP-based network enabled ongoing technology upgrades, such as city-wide access control and video.  For access control, Columbus use HID cards, which grant access through proximity readers, combined with magnetic locks on the door. These are all connected to the same centralized system.

“The centralized IP-based system is also highly scalable, saving a lot of money in the long run,”

“The centralized IP-based system is also highly scalable, saving a lot of money in the long run,” adds Plumb. “Instead of expensively outfitting every newly added building with a server and access control panel, locations with 16 or fewer card readers use a Matrix System Gateway (SMS) to communicate with the city hall base server.”

Although official data has not been completely verified yet, Plumb says that crime in Columbus appears to have decreased since the installation of the new centralized security system.

Plumb explains that technological developments, coupled with a financial grant from the US Department of Homeland Security, were instrumental to the overhaul: “Our existing analog system from the 1990s had outlived its useful life and there were better things on the horizon, like HD cameras, new locking systems and software. Switching to an IP-based system allowed us set up a centralized command center and we’re able to monitor much more than with the analog system, where the possibility to store footage was as limited as the video quality. With the software we’re using, we’re able to pull up 64 cameras on one screen simultaneously. We can pick and choose and resize as we wish, using any camera we want.”

The advent of more affordable pan-tilt-zoom cameras (PTZ’s) lets Columbus’ security staff control cameras remotely and follow whatever has trigged a movement sensor or a door lock alarm. “Instead of a fixed camera with a single view you can take this camera and track whatever is moving along its path. Since the camera is motorized, you don’t just zoom but you can move the entire camera to follow an intruder from one camera to the next,” notes Plumb.

The IP-based system allowed Columbus to smoothly incorporate all existing neighborhood cameras, and 320 cameras are now part of the system, with a further 200 in the pipeline.

“Some cities have public safety departments monitoring neighborhood cameras, but few have it all culminate in a centralized command center like Columbus,”

“Some cities have public safety departments monitoring neighborhood cameras, but few have it all culminate in a centralized command center like Columbus,” says Plumb. “And being a digital system, it can send footage and reports to mobile devices such as iPads and cell phones.”
Future technology upgrades such as wireless biometrics, video analytics and mobile apps will be possible with the open architecture design of the city’s centralized system.
In Sollentuna, Buske prefers heat sensor cameras to conventional cameras, connected to an alarm centre. These cameras automatically trigger an alarm in the case of movement in a restricted area and the alarm center rapidly dispatches a security guard. “I believe heat sensor cameras are superior to conventional cameras for preventive objectives,” says Buske. “Securing forensic evidence collected by conventional cameras is less important to us than trying to prevent the damage before it occurs. It’s all about damage minimization and stopping citizens before they conduct a felony.”

Technology aside, the people aspect is just as important to security

Technology aside, the people aspect is just as important to security, adds Graham, pointing to public libraries: “The main concern is showing librarians, most of whom are rather passive by nature , how to assert themselves and really control the library environment. That is part of the reason they are in the building after all.” 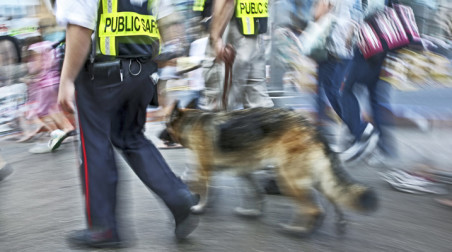