As security requirements expand within schools, educators are faced with a balancing act. How do you ensure safety without turning schools into fortresses?

Those who follow the headlines probably think that the main security risk in schools is someone running amok with a machine-gun. But in fact, the challenge is much bigger: how do you create the right atmosphere in a school day after day, so that good behavior and respect towards others are the norm?

“Fire doors and fire drills and unscheduled exercises on how to deal with a school shooter are all very important,” says Gaby Schuld, a teacher responsible for facility management issues in a secondary comprehensive school in Cologne, Germany. “But our security priority is our relationship with the students.”

In the task of ensuring security at her school, students are her main allies. But with some 1,800 students, the first task is to create groups which are small enough to be able to take responsibility.

“We have teaching groups of seven to nine teachers with three classes of altogether around 80 children,” she explains, “and they stay together all the way through their education.” The teachers get to know the children well. “I know who’s feeling unhappy today, I know what goes on at home, I can spot a child who has changed worryingly. And they know they can talk to us,” says Schuld.

The school emphasizes the “safe classroom”, where children are encouraged to feel secure “not only physically but also emotionally,” says Schuld.  The students even design the rooms – after all, they’re going to be there for six years.

And in that, the school is following one of the principles of Crime Prevention Through Environmental Design (CPTED): if the students feel the classrooms belong to them, they will protect them – what Rob van Dijk of Cocoon Risk Management in Zoetemeer, the Netherlands, calls “territoriality.”

Cocoon usually works with commercial companies, but it sees improving safety in schools as its contribution to the wider community. Consulting with stakeholders, it develops a plan for ensuring that security is built into the school.

“You don’t rely so much on security cameras, guards and metal detectors,” says van Dijk, “although they may still be important. You rely more on your contact with the students. They’ll be happier if the environment is not like a prison.”

You can’t stop someone coming in with a gun, he says, unless you have airport-style checks. “You can only detect someone behaving strangely, so you need to divide schools into smaller areas, where teachers can have real control.”

Jan Boele, in charge of facility management for the Da Vinci vocational training college in Dordrecht, south of Rotterdam, the Netherlands, has worked with Cocoon to develop a new facility into which 600 students are about to move.

“The new building is in a rough part of town with rival gangs, so we were a bit worried,” he says.

Cocoon speaks of a quartet of influences: the neighborhood, the building, the students and the teachers, which have to be linked. The school will be welcoming to the community: for example, there’ll be a bike workshop, to which neighbors can bring their bikes for students to repair.

Art Hushen of the National Institute of Crime Prevention, a private company based in South Carolina which offers training in CPTED, emphasizes the importance of involving the community, especially where the neighborhood is problematic. “You may have to start with armed guards to reclaim the school, but it can become a beacon for the community, and the only safe place the kids have. People who live in poor neighborhoods have more needs than those who live in rich areas, so you might introduce social services into the school so that parents will also come in.”

But all agree that it’s the relationship between children and teachers which is central. “Students should feel respected, they should show respect for others, and they should feel safe,” says Boele.

Even in Da Vinci’s old building students have been encouraged to feel as if they own the place – they decorate at least one wall of every classroom. They have even made some of the furniture themselves. Students training for work in the security industry stand at the doors, checking the ID cards of their peers. They are chosen carefully to ensure that they are not themselves subject to pressure from any of the gangs.

But in the new building, more can be done. While toilet cubicles are private, washrooms have glass windows, so they can be seen from outside. “There is a loss of privacy,” says Boele, “but we have to weigh that against the risk of bullying and violence.”

Indeed, throughout the building, transparency is the watchword: corners where people could hide have been opened up.

As a result, says van Dijk, the school has been able to reduce the number of security guards from six to one – a local guy who talks to the students, and advises as much as controls them.

Essentially though, it’s the job of the teachers to ensure security. Van Dijk can help them by proposing design solutions which back up their efforts. These can vary from simple color schemes (“blue is more controllable, red is more active – so you don’t want red in a room where people will take exams”) to construction issues

Each school has to find its own solutions for its own problems. But certain things are common to all: Children and teachers need to have pride in their school and that’s not possible if the school is seen as a dump.

“Do you have grass in the school yard?” asks Hushen. “Or do you have dirt because of the poor maintenance budget?”

It’s easy to put in cameras – but, for real security, it’s much more effective to create pride and an atmosphere of trust. 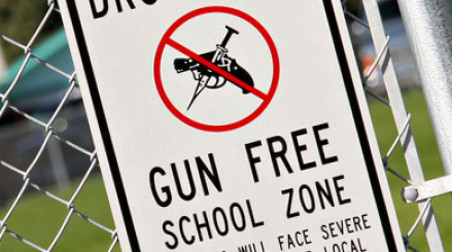