Olympic Games: A catalyst for change

The tension is mounting as London gears up for the 2012 Olympic Games. Heightened security measures are triggering debate, as well as encouraging innovative ideas and solutions for the future.

Allison Wylde, senior lecturer in business analysis at London Metropolitan University, has been researching into the way the 2012 Summer Olympics has influenced security companies to respond through innovation.

Security is an important issue, she says, but it’s not as easy as that: “There’s a real tension between visitors feeling safe and the downside of feeling overwhelmed by security.”

The Olympics “create” threat in that they are a perfect backdrop for any terrorist who wants attention. Two serious terrorist attacks have occurred at Summer Olympics in the past: In Munich in 1972, members of the Palestinian Black September took Israeli athletes hostage and 17 people, including 11 athletes, were killed in the course of a botched rescue attempt. And in 1996, in Atlanta, two people died when Eric Robert Rudolph laid a bomb in the Olympic Park as a protest against abortion.

Less than 24 hours after the announcement in 2005 that London had won the Olympic bid, four bombs went off on London’s public transport system, leaving 52 people dead.

Less than 24 hours after the announcement in 2005 that London had won the Olympic bid, four bombs went off on London’s public transport system, leaving 52 people dead. Although the timing was probably coincidental, the potential threat was evident.

Added to the big threat is the usual problem of stopping people from forging tickets, picking pockets or stealing cars. The 450,000 extra people in London having a good time are bound to attract criminals to feed off the crowds. That means that every high-street store will have to have its own Olympic security strategy, even if it is not as drastic as that of the new Westfield Shopping Centre, next to the Olympic Park, which has operated high-security vehicle screening ever since it opened in September 2011.

In addition, the Olympics don’t just take place in London: major stadiums throughout the country will host football games, the rowing will be on a lake near Windsor and the sailing events will take place off the south coast.

More soldiers will be deployed during the Games than are currently fighting the war in Afghanistan.

Perhaps as a result of the extent of the perceived threat, the British government has passed the Olympic Games Act 2006, creating what some people are calling “a state within a state.”  More soldiers will be deployed during the Games than are currently fighting the war in Afghanistan. Surface-to-air missiles have been installed on blocks of flats. Naval commandos will be on hand in case there’s a Mumbai-style attack across the Thames, and there’ll be an aircraft carrier stationed on the river. The Olympic Zone will be surrounded with an 11 mile-long (17.7 km) electric fence. The security budget has increased from GBP 282 million to GBP 553 million (approx. USD 850 million).

So it’s clear that Olympics create threat and regulation, but Wylde’s work has mainly been in the second dimension: how the Olympics have led to a speeding up of innovation through networking and complexity. Naturally, most of the companies which have spoken to her have done so on condition of confidentiality, but she points out that the Olympics have led companies to innovate, often in ways that are not obvious.

The Olympics have led companies to innovate, often in ways that are not obvious.

This “hidden innovation” – as it’s been called by the National Endowment for Science, Technology and the Arts (NESTA) in a report in 2007 – occurs when companies adopt new ideas which are not measurable by conventional means.

Among the four types of innovation which NESTA identified were innovation “in organizational forms or business models” and “in the combination of existing technologies and processes.” The significance of such actions may not be fully taken into account, even by the companies adopting them. “It’s simply not on the balance sheet,” says Wylde. She’s now working on a longer-term project which will try to quantify the size of what she calls this “security service intelligence sector.”

As Wylde points out, “The Olympics are so big that they are pushing companies to behave differently.” But the change doesn’t have to be dramatic: “It could be a manned guarding company which adopts new duty rosters, and thus saves money.”

It’s very hard to find a company which will reveal concrete examples of what it is doing for the Olympics, but one of her findings has been the extent to which “security intelligence” is a factor for many businesses, many of which are not security providers.

“The Olympics is like a snowball rolling down a hill,” she says, “pushing people to do things, or at least to do things more quickly.”

“The Olympics is like a snowball rolling down a hill,” she says, “pushing people to do things, or at least to do things more quickly.”

And like every big event these days, these Olympics are going to be Green Olympics, so that environmental aspects also play a role. One security company is issuing its guards with a kit which will allow them to power down unneeded electrical equipment as they do their rounds. “It’s not new tech,” says Wylde, “but it’s a new way of management thinking to adopt this integrated technological solution, and it has been driven by the Olympics. It probably would have happened eventually anyway, but the Olympics have made it happen now.”

At a press conference in March, the British prime minister, David Cameron, said, “I’m determined this will feel like a sporting event with a really serious security operation, rather than a security operation with a really serious sporting event.” The fact that he felt he had to say it shows that some people are skeptical, but no-one would want an Olympics without any security at all. That’s the tension which lies behind the task of running the Games.

It’s up to the security industry to solve the problem. 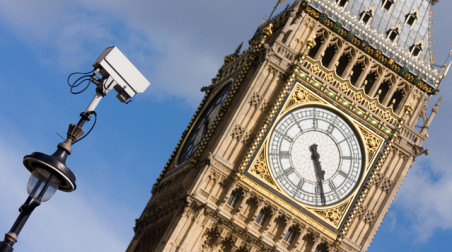