VISA runs shopping trials using iPhones and rumors circulate about NFC capability in the next version of Apple’s iPhone.

If email, Web surfing, Facebook, and Angry Birds haven’t been enough to make our lives revolve around our smartphones, thanks to near-field communication (NFC), we will soon be able to use our mobile devices for access control or paying for our shopping as well.

VISA is running several trial projects in Europe and Australia, together with local mobile phone networks and national banks. In the European trial, the consumers attach a small wireless device onto their iPhones and download Visa’s app. The consumers can then make purchases by simply launching the app on their iPhone.

In Australia, the system works with PayWave terminals that have been installed at over 20,000 retail stores around the country. To make a payment – under 100 Australian dollars – the user needs to launch a PayWave app and then activate the payment.

“Mobile payments already exist in emerging markets, and with the global economy that we live in, that development will surely reach the US as well. The emerging markets are my canary in the coal mine,” says Trish Dorsey, senior vice president at TNS, a research and consultancy company.

The canary is alive and well. Based on the company’s patent applications, Apple has been rumored to have NFC capability in the next version of their iPhone.  NFC is seen as the next big step towards mobile payments.

Should Apple get into the NFC game, it might be able to change it completely, just like it’s changed the mobile device and the tablet markets – as well as the music player market.

“I wouldn’t put it past them to launch another game changer. Apple already has the hearts and minds of the consumers, and the trust for their products is already there, as evidenced by the fact that my 80-year-old mother uses an iPad,” says Dorsey.

“Apple is so phenomenal at creating a need where the consumer doesn’t know one exists,” she adds.

Apple isn’t the only one working with NFC. On the contrary, Nokia and Research in Motion, the company behind the Blackberry, announced a while back that they will include NFC in their future handsets.

Google is about to get in the game, too. Its Android operating system now supports NFC, and Samsung already has introduced several phones with built-in NFC. Google will also launch a trial of its own in selected US cities, installing thousands of special NFC compatible cash register systems at selected retail stores.

The latest information has Apple pushing their NFC launch to iPhone 6, due to “incomplete NFC standards” in the industry.

Mobile payments on the rise

According to In-Stat, a market intelligence company, the number of different forms of mobile payments will increase from the current 116 million to over 375 million in 2015.

Earlier this year, Starbucks announced its plans to roll out its barcode-based mobile payment service across the US.

“Starbucks is unwilling to wait for the NFC infrastructure in the US to reach critical mass before offering our customers the fastest way to pay,” says Chuck Davidson, Starbucks’ category manager for innovation in a press release.

“Starbucks will continue to explore NFC, but until a meaningful number of our customers have NFC-enabled mobiles, we remain focused on our current platform,” he adds.

Big strides are now being taken on all three fronts: the handset manufacturers, the network providers, and the point-of-sale facilitators.

In a statement from electronic payment technology company VeriFone, CEO Douglas G. Bergeron said: “The retail point of sale represents a point of convergence for smartphone-initiated payments, social networking and electronic coupons, but it won’t happen if retailers are expected, on faith, to absorb the costs of making it work.”

Also according to Bergeron, consumers won’t adopt a new payment solution until they can be confident that it is being widely accepted, and works at more than a few select retailers.

“Maybe that’s where Apple can come in with a solution and engage in a partnership with banks and network providers that will supply the last ten percent,” says Dorsey. 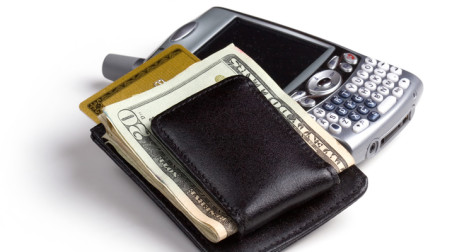