It’s been 50 years since the first Bond film was launched in 1962 and the gadgets from the popular series have gotten increasingly sophisticated. Some of the technology has even paved the way for modern security solutions.

From the start, James Bond has been surrounded with technology, although the first attempts were relatively unspectacular. Dr. No in 1962 saw Sean Connery equipped with his trademark Walther PPK 7.65 mm firearm, a Rolex Submariner watch, a Geiger counter and self-destructing bag. You can’t buy that sort of stuff at your local supermarket, but a man like James Bond probably doesn’t go into supermarkets anyway.

The second film, From Russia with Love, had a couple of things which may have seemed special in 1963, but nowadays they seem, well, a bit vintage – I mean, pagers are only found in TV hospital series; who needs something to tell you your telephone is bugged when every telephone can be bugged from a distance; and a small reel-to-reel tape recorder hidden in a camera! – hey, what’s a reel-to-reel tape recorder?

But, as screenwriter and Bond historian John Risner says, “The gadgets in the first two films were based on what was in the books, but by Goldfinger [1964] the producers had decided to make the gadgets something bigger.”

That’s when Bond’s Aston Martin DB5 arrived, with machine-guns behind its headlights, revolving licence plates, ejector seat and smoke sprayers at the rear. There’s an atomic bomb in the film and a lethal bowler hat (not only the good guys have gadgets), as well as that ridiculous wetsuit with a rubber duck on the top (not all the gadgets are serious).

“The CIA was very interested at the time, and wanted to develop something similar.” It never happened back then, but it’s easy now.

But as Risner points out, the gadgets are never too far from reality: “The producers would look at technology which was already available or on the drawing board and just go one step further.”

Ken Adams, the production designer for the early films, would read magazines or go to trade shows, to see what was out there. Risner has a good example: “The mini-helicopter Little Nellie [from You Only Live Twice of 1967]: Ken Adams saw it in a magazine and contacted the inventor. I think it’s still being produced” – although probably without the rocket launchers, guided missiles and flame throwers.

From GPS trackers to telephones in the car, the early Bond gadgets were just ahead of the real world.

But, according to Mark Stout, historian at the International Spy Museum in New York and a former intelligence officer, the development was sometimes the other way round, and the Bond films got the real world thinking.

“There’s a tracking device which James Bond uses to track Goldfinger on a screen in his car,” he remembers. “The CIA was very interested at the time, and wanted to develop something similar.” It never happened back then, but it’s easy now.

Or there’s the facial recognition device used by the villainous Zorin in A View to a Kill (1985).  It took a picture of Bond in disguise and put it through a computer which identified him from his undisguisable facial characteristics. “The CIA’s William Casey called in Tony Mendez, who now works with our museum, and asked him, ‘Do we have something like this?’ They looked into it, but it was too difficult at the time,” says Stout.

Now, that technology is widely deployed and fairly accurate.

Stout admits to having been disappointed in what seemed to him at the time the unlikely technology of the invisible car in Die Another Day (2002).  Q (the man who provides Bond with the gadgets at the start of most of the films) says it works by using active camouflage, with video cameras all around, projecting pictures of what’s on one side of the car on to the other, so that it “disappears.”

“But in 2011,” says Stout, “BAE presented its Adaptiv military camouflage, which does exactly that in the near infra-red spectrum, so that a tank can disappear to thermal imaging night-vision devices. You could say that BAE has done something which is very James Bondesque!”

Both Stout and Risner agree, though, that the gadgets have to know their place in the movies. As Risner says, “The audience wants Bond to do it on his own. We love the gadgets and we’d miss them, but we don’t want Bond to solve his problems entirely with them.”

But there are gadgets which will never work however cool they are: Bond has another Rolex Submariner in Live and Let Die (1973), but this one is equipped with a powerful electromagnet designed to deflect bullets. Aside from the fact that it’s hard to imagine how the watch would stay accurate, you just try deflecting lead bullets with a magnet! 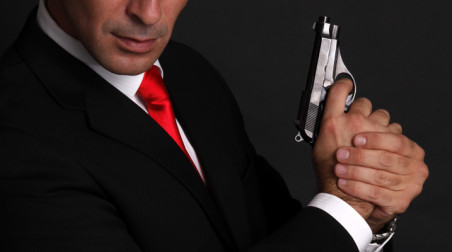