Increased integration, more software, and remote monitoring are just a few of the growing trends in home security. Yet some industry players suggest a more holistic approach that encompasses more than technology.

Keeping your home safe used to be simple: you put a big lock on the door and told everyone not to smoke in bed, and that was that. But the increasing sophistication and integration of technology has meant that residential security is now seen in the context of the whole house and all its services.

As Robert Dodge, senior vice president international, Pinkerton Corporate Risk Management says, “The camera which identifies an intruder can also potentially identify safety risks such as smoke or somebody falling over.” Intelligent analytic software which can recognize significant patterns is increasingly part of the security package.

According to Paul Williams, vice president for Security and Communication Products at Control4, a global provider of residential and light commercial automation systems, “There’s been a big increase in the integration of security into home automation – 75 percent of our systems now include some security, such as cameras or access control.”

“There’s been a big increase in the integration of security into home automation – 75 percent of our systems now include some security, such as cameras or access control.”

Much of this is automated and integrated: the system can be programmed so that, if someone breaks in to the home, not only does the burglar alarm go off, but all the lights inside and outside the house are turned on full, and the home audio plays at maximum volume. Only the coolest (or stupidest) burglar will carry on under such conditions.

But systems only work if they are activated, and according to Williams, some 15 percent of householders don’t turn their alarms on unless they’re going away for a longer period. So it’s not just effectiveness which is important, systems also have to be easy to use. Williams mentions a keypad lock which has a radio connection and, when added to an automation system, can be programmed to turn off the alarm system when it’s opened.

What’s important is the way technology is integrated into early warning intelligence and incident response, but, says Dodge, “There’s an over-reliance on technology without proper human detection.” Instead of buying more cameras, people may need a different way of responding to the information they already have, he adds.

“For example, if a camera monitors someone parked in a car outside, perhaps what you need to do is go outside to check your mailbox, and look at the guy, maybe write down his plate number. That way you’ll be better able to assess the potential threat, and you’ll make it clear you’ve seen him.”

For that, you’ve got to be at home, but modern technology has certainly improved the potential of remote control. A few years ago, a British man who was on holiday in Spain, phoned the police in his home town to say that his home was being burgled and would they go round and check. He was monitoring his home security cameras on the beach.

Paul Williams of control4 says that all their systems can be monitored and controlled by smartphone apps. While in the US it is quite usual for systems to be centrally monitored by security companies or for alarms to be directly linked to the fire department, in other countries that is less common. “China, for example, doesn’t have monitored alarm systems so many systems are self monitored. If something happens, an email is sent to friends and neighbors.”

“With the Internet of Things, everything has IP communication, so that washing machines can tell you when they break down.”

But, says Williams, security hasn’t yet entered the social media age: “You can communicate with the manufacturers using social media, but you can’t use it for control. There’s no intrinsic problem with the concept, but people have a privacy problem: they’re prepared to reveal details of their private life, but not their home.”

Yet communication has become a central part of modern security, and it’s not just classical security issues which can be communicated: you can check if your teenage children are staying out too late or if your elderly parents have opened the fridge in the morning. These are also aspects of a wide security concept.

“Everything is increasingly working together,” says Williams. “With the Internet of Things, everything has IP communication, so that washing machines can tell you when they break down.”

IP cameras, he says, are becoming more and more important, and he would like to see more cloud-based services, with IP camera clouds. “Homeowners would only have to install a camera and they would immediately have access.”

For an integrator, it remains inconvenient that the two main radio communication systems for home automation, Z-Wave and ZigBee, both require interfacing with the Internet of Things. “The two technologies have done a lot,” says Williams, “but there’s still a need for more standardization.” 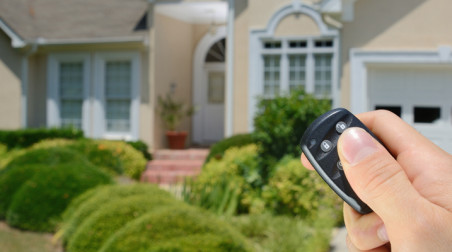