Giving – and getting retail service

Whether it’s a security system or an entrance system, retailers cannot afford downtime. Various services are popping up to ensure that doors, locks and loading docks, open and close when they are supposed to.

Retailers walk a constant tightrope. They need to make it easy for customers to get into their stores, but they also have to control access enough to make sure that merchandise doesn’t walk out the door without being paid for.

“The worst thing that can happen to a retail outlet is not being able to open those doors, for a multitude of reasons”.

“The worst thing that can happen to a retail outlet is not being able to open those doors, for a multitude of reasons,” says Brendan Alexander, director of loss prevention at Best Buy/Future Shop Canada. Consumer confidence depends on stores being open when they are supposed to be, and retailers don’t want their staff locked out and unable to get inside the store.

As more large retailers adopt electronic locks for their doors, it becomes increasingly important to make sure the system doesn’t fail. While electronic locks are more expensive to install than mechanical locks, most retailers find that they save money over time. As Alexander says, “If a key becomes lost or stolen, we don’t have to repin all of our locks” – an expensive proposition.

But what happens if the power goes out? “Most systems are equipped with battery backup systems that help open the door when there’s a failure,” says Geert De Smet, marketing and sales director for Pedestrian Door Solutions at Besam in Belgium. “This can also be done mechanically – it depends on the area. Every country in Europe has its own law.” Belgium requires a mechanical system, De Smet says, while backup battery systems are considered sufficient in Sweden. Retailers in East Asia also generally depend on battery backup, he says.

“Many retailers may not want a fail-safe solution, in case something happens in the middle of the night”.

Steven Lewis, a senior product manager at Software House, part of Tyco Security Products, draws a distinction between “fail-safe” and “fail-secure” solutions. If the system loses power, a door with a fail-safe lockset will remain unlocked, while a fail-secure door will stay locked.

“Many retailers may not want a fail-safe solution, in case something happens in the middle of the night,” Lewis says. “Most retailers would like to have a fail-secure solution.”

It’s always sending out a message saying, ‘Hey, are you still there?’ and the controllers say, ‘Yeah, I’m here.’

One tool that retailers use to make sure the doors keep working as planned is the “health check” message. “The server is always checking to see that those devices are there,” Lewis says. “That’s how it knows that the controllers are working, whether it’s an intrusion controller or a video server or the access control panels themselves. It’s always sending out a message saying, ‘Hey, are you still there?’ and the controllers say, ‘Yeah, I’m here.’ If that ever doesn’t happen, the system operator is notified by the server that the device didn’t respond.”

At the same time, the controller is always reaching out to the server as well adds Lewis. “The system is always communicating back and forth in both directions.” A series of nonresponses in either direction indicates a communication problem that can be addressed right away.

While retailers strive to make sure customers can always get into their stores, they also need to concern themselves with shrinkage, or merchandise that leaves the store without being paid for.

Many of the same companies that provide entrance systems also offer products that help combat shrinkage, often integrated into the same solutions. In one Tyco solution, strategically positioned cameras capture high-quality images that provide an important deterrent. A store manager who is responsible for several stores can monitor them all remotely from any location using an integrated video and access-control system. In addition, access to sensitive areas such as cash vaults can be programmed so that two individuals have to present their credentials simultaneously to gain entry.

The PedMon system counts the number of people passing through doors or passageways in either direction, to provide data on pedestrian flow and occupancy levels

Providers of entrance system services can do much more than just make sure the doors work as planned. In Hong Kong, the upscale Harbour City shopping mall employs a Tyco system called PedMon, short for pedestrian monitoring. The mall houses some 700 shops and 50 restaurants, plus cinemas, hotels and more than 4 million square feet of office space. The PedMon system counts the number of people passing through doors or passageways in either direction, to provide data on pedestrian flow and occupancy levels. The traffic figures can influence future business decisions such as where to locate promotions, or they can be used in tenant rental negotiations. 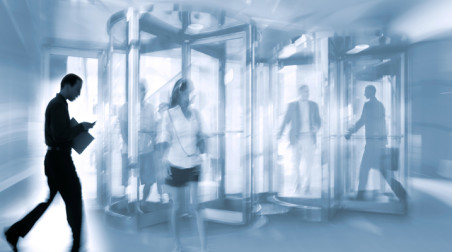