Getting a handle on bacteria

According to the British National Audit Office, 300,000 people pick up infections in British hospitals every year, and at least 5,000 of them die as a result.

One of the main ways infection spreads in hospitals is by cross-contamination: someone touches a surface with bacteria on it, and carries them somewhere else.  Door furniture is particularly sensitive, since it will be used many times a day—often just before someone is about to deal with a patient.  A nurse will open the door before changing a dressing; a visitor will open a door before kissing or shaking hands with a patient.

The traditional way of dealing with such surface contamination is by regular cleaning with disinfectants.  But cleaning can be careless and inadequate, and can even contribute to the transfer of bacteria. A better solution would be to create surfaces which themselves kill the bacteria without any intervention from human beings.

Such surfaces exist. Certain metals seem to kill bacteria efficiently, by preventing respiration, inhibiting reproduction and disrupting metabolism, although it’s not quite clear how. Claims have been made for titanium and nickel, but the main competitors in the field are copper and silver.

Killer copper
Copper and its alloys were once used for such items as taps, door handles, and push plates, but they have largely been replaced by stainless steel. Stainless steel is easy to clean, but it has no effect on levels of surface bacterial contamination.

It may be time to go back to copper. The Copper Development Association (CDA) has gained approval from the U.S. Environmental Protection Agency (EPA) for the claim that uncoated copper kills more than 99.9 % of five bacteria within two hours of exposure.

Pure copper is very effective indeed, but scarcely ideal for door furniture: it’s soft and tarnishes easily, and the use of waxes, polishes or coatings stop copper ions from getting out and doing their deadly work. Alloys such as bronze and brass are harder, and almost as effective.

Battling bacteria
The use of silver has to be approached in a different way, since it would be prohibitively expensive to make door furniture out of silver. But small quantities of ionic silver appear to be very powerful. One company, Agion Technologies, hosts its silver ions, sometimes with zinc or copper, in a zeolite powder. Ions are released in response to moisture. Studies have shown that it too can reduce bacterial levels by more than 99.9 percent after two hours.

Joel Makhluf of Agion’s Marketing department says, “Our expertise is silver antimicrobials, and we partner with manufacturers to add the feature to their products.”

The additive has varied uses. As well as in health care, it may be found in air-conditioning systems, on computer keyboards and mice, mobile phones – even running shoes, to stop the smell of sweat.

It’s also used in a coating for locks, levers and other architectural hardware products. The product, called MicroShield™, is supplied by Agion through Dupont, and it’s being used, not just in hospitals, but also in schools, senior citizens homes, laboratories, even offices and homes – wherever there’s a concern about cross-contamination.

In the US for example, MicroShield is being sold to schools, and requested for many of the same reasons related to healthcare; it inhibits the growth of bacteria, fungus and molds. “An additional benefit is a higher attendance rate at schools because bacteria and viruses cannot easily be transferred from ‘high touch’ surfaces such as door levers, handles and the like,” says Robb Tibbling, Director of Business Development, End-User Markets, for ASSA ABLOY Door Security Solutions.

He says that ASSA ABLOY was initially interested in the product because of Agion’s existing involvement in the health industry. “They had a lot of experience with critical healthcare products, such as catheters,” says Tibbling.

“HAIs (Healthcare Acquired Infections) are the third leading cause of death in US hospitals, at over 100,000 a year and they are becoming very costly,” he adds.  “Hospitals may face litigation, loss of accreditation and, at least, the costs of treatment.  It’s no wonder that, together with conventional solutions, such as improved hygiene and better procedures, the idea of a surface that actually helps in the fight against infection is proving increasingly attractive.” 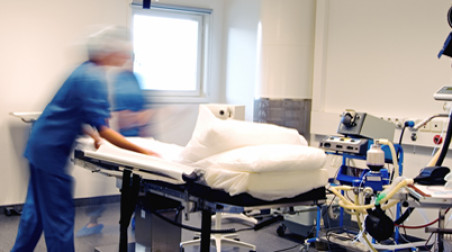