Executive protection on the move

An increasing number of companies are turning to executive security, not only for the office and home, but to protect executives while they are traveling.

“I know CEOs who just have a big hulking guy follow them around,” says David Katz, the CEO of Global Security Group and author of The Executive’s Guide to Personal Security. “But, if a situation arises, that person is useless unless they have experience in the most important part of the job: preparing and planning for unforeseen events.”

“We want to think smart, ahead of time, and not draw any attention to the individual.”

The business is about prevention, says William Daly, senior vice president of Control Risks, a global risk consultancy. “We don’t want to get into a situation if possible. We don’t want to have to drive over a sidewalk to get away. We want to think smart, ahead of time, and not draw any attention to the individual.”

A wide range of companies are looking to security measures for their executives and key employees, says Daly, including financial organizations, businesses in the oil and mining sector and more. The global Occupy protest has also seen an increase in the need for security for banking executives.

When an executive or employee is singled out to receive additional security, professionals start with conducting a detailed risk assessment. “Every phase, every part of the protectee’s life is scrutinized for possible security issues,” says Katz.

Four key security areas for any client: Office, residential, commutation between the two, and travel.

The amount of security in place is determined by the level of risk exposure the client may have. “We like to make the security flexible so that we can adjust it up and down depending on the changes in the threat landscape,” says Daly.  He identifies four key security areas for any client: Office, residential, commutation between the two, and travel.

During travel, security professionals must take particular precautions when their clients venture to the so-called “bad neighborhoods of the world.”

With 34 offices around the world, Daly can tap into his team to keep up-to-date on ongoing risks in various locations. “Some places you know, right off the top, that there will be a risk of kidnapping or criminal events,” he says.

But it is not only the “usual suspects” that security professionals need worry about. “Pick a country, it doesn’t matter which, there is a certain level of risk in every country,” says Katz.

“You are in charge of all aspects of transportation and you want to plan every possible aspect: today he’s flying to LA. Okay, we have to check traffic, consult with the pilot, deal with any persons who may be accompanying our client. Do they have any special needs? Any health concerns or allergies? Hotels can get complicated. You should never be asking yourself: Where are we going to park the car? Which elevator should we take? The planning has to be to that level of minutiae,” says Katz.

Security measures in the office can be a combination of more traditional access controls, including cameras and barriers that would be difficult for an adversary to overcome in order to reach the subject. “In this day and age, we also have to consider workplace violence,” Daly adds.

The commute may include a driver who is also a security specialist, while security at home can include the full spectrum including exterior lights, panic alarms, panic rooms and security personnel on site.

Technology also plays a role in the process.  Daly identifies two key areas where technology can support executive security: There are web-based, online tools that can provide immediate, detailed information regarding an executive’s travel itinerary – information such as flights, names and hotel reservations can be made available immediately.

There are also newer technologies in GPS and GSM that allow for seamless communications, location tracking and duress alarm signaling, says Daly. “These capabilities are available through mobile phone and data devices. Although the availability and dependability of these technologies are advancing rapidly, they should, in reality, be viewed as ‘portable alarm’ systems, since they do not provide actual security themselves.”

Looking to the future, both Katz and Daly expect to see tracking devices that are smaller and more nondescript, perhaps incorporated into jewelry or clothing.

“It’s all about communications,” says Katz.  “We rely mostly on encrypted radios with a good range.”

If you become more dependent on technology, you could be creating a false sense of security for your traveler, says Daly.

“The bottom line is, no matter how sophisticated the remote monitoring technologies become, they will not replace the value of a well-trained professional protection agent to be vigilant and provide immediate support.”

In many locations, security can also include making an executive aware of cultural issues. Sometimes just having them blend in with that environment streamlines and makes the trip easier,” says Daly.

The main thing, says Katz, is to keep the executive safe while also saving him or her time. “You never want your principal to wait. Their time is very valuable and we are tasked with making sure they’re not wasting unnecessary time by getting them from location to location seamlessly and quickly.” 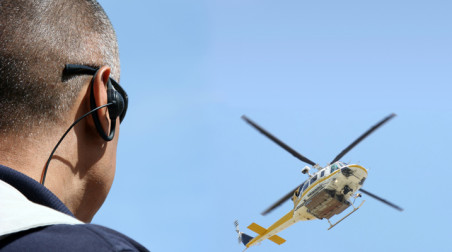