The global market for CCTV has grown enormously with digitalization and video over IP paving the way for improved surveillance systems. So how are camera developments keeping up?

If there’s one thing everyone seems to agree on, it’s that providing security cameras with Internet Protocol (IP) was a major moment for the camera industry.

“Everything started with IP,” says Archana Rao, senior research analyst for electronic security with business research company Frost and Sullivan. “It was the origin of all the innovations.”

Video over IP was the most important development, says Frank Pokropp, sales manager for security technology at W.I.S., one of Germany’s biggest security providers. “It revolutionized the market.”

IP was possible because of digitalization, and the two developments together have made a big difference: megapixel cameras, video analytics and remote monitoring have all been made possible, or at least easier, by having digital cameras linked into networks.

“Analytics has got much better,” notes Pokropp. “It will get even better, but it’s not perfect yet.” And he points to a W.I.S. project to monitor 50 aircraft parking places at Leipzig Airport for the logistics company DHL. “There were too many false alarms initially,” he says, “so we had to use special software which builds 3D video, and now we’ve got the problem under control.”

Most installations still use analogue cameras, but there are many bottlenecks in the system: as Torben Vanselow, CEO of Ideal CCTV, a medium-sized system installer says, “Most DVRs are still recording at CIF (Common Intermediate Format) resolution.”  The digital revolution is helping remove the bottlenecks, as improved compression and cheaper storage allow the entire chain to be optimized.

Johan Paulsson, CTO of camera manufacturer Axis, argues that camera potential and computing potential have to work together.”It’s not that easy to develop a good megapixel camera with a good low-light capability” he notes as an example. “You can increase the gain of the sensor, but that generates noise, which means you need more processing power.”

Improvements have been dramatic: two years ago, he says, a 2 megapixel camera was no good in low light. That’s changed. “But people are still scratching their heads over how to balance high definition with low-light functionality,” he adds. “One way is to convert a 5 MP camera into a 1 MP camera at night. But you have to listen to the customer; he doesn’t always need the highest resolution.”

Both Pokropp and Vanselow would agree.  Both are keen on megapixels, but they’re sceptical about the biggest numbers on the market. There are 16 MP cameras out there, but Vanselow points out that, for many purposes, a VGA camera is still good enough: “You don’t need anything else for people passing through a corridor.”

Pokropp is often happy with 1.2 or 2 MP: “Customers argue against higher definition because of the higher cost, the need for extra storage and the greater compression,” he says.

A relatively new development is the possibility of including thermal imaging cameras in CCTV networks. Such cameras identify heat difference and thus can “see” living creatures against a cooler background even at night and in poor visibility, but they have been too expensive for anything other than the military. Now, the first network thermal imaging cameras are arriving on the regular market.

Paulsson says such cameras in most cases are linked with conventional cameras in the same analytics network.  His company has been working on reducing the cost to make the cameras more affordable, with, for example, alternative materials.”Lenses for thermal imaging cameras have been made of germanium, since glass does not let heat through. New materials which are cheaper to buy and perform better are now available,” he says.

Pokropp says he needs such cameras to back up conventional CCTV in covering large areas, although they had what he calls a “scary” experience using a thermal imaging camera on its own.

“We had one covering a railway level crossing,” he says, “and in the recent very hot summer, the ballast was heating up to around 35°C. At that temperature, the camera couldn’t identify a person crossing the track.”

Even though IP cameras are the future, the majority of cameras sold today are still analogue.  Rao says the economic crisis has slowed the take-up of the new technology, but, in a recent study, she forecast that IP cameras are likely to move ahead in 2011.  “Installation costs are lower because you can use your existing IP network,” she says, summarising the advantages.  “You can control the system remotely; and you can use higher resolution so that you can produce good images which will stand up in court.”

Pokropp goes further: “As they become more intelligent, cameras will replace fire alarms, and they’ll control identification for access purposes,” he forecasts. “I expect to see cameras replacing many other security systems in the future.” 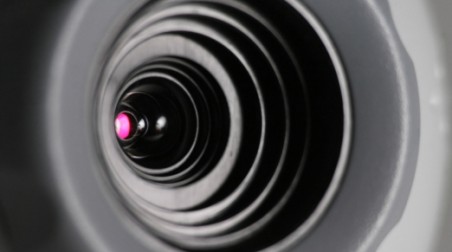