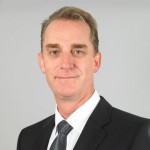 EXPERT OPINION. Let’s begin with something that’s hardly front-page news: the market potential for wireless access control is huge. At January’s Intersec exhibition forecasts of 15% annual growth in the Middle East region alone were suggested. ASSA ABLOY’s own data predicts that wireless locks could make up 30% of the total market within a decade. The potential is there. But when ASSA ABLOY worked with IFSECglobal.com last year on a major market survey of security managers, industry insiders and decision-makers, we encountered some big surprises.

The conclusion: our market knows less than you think about wireless locks. 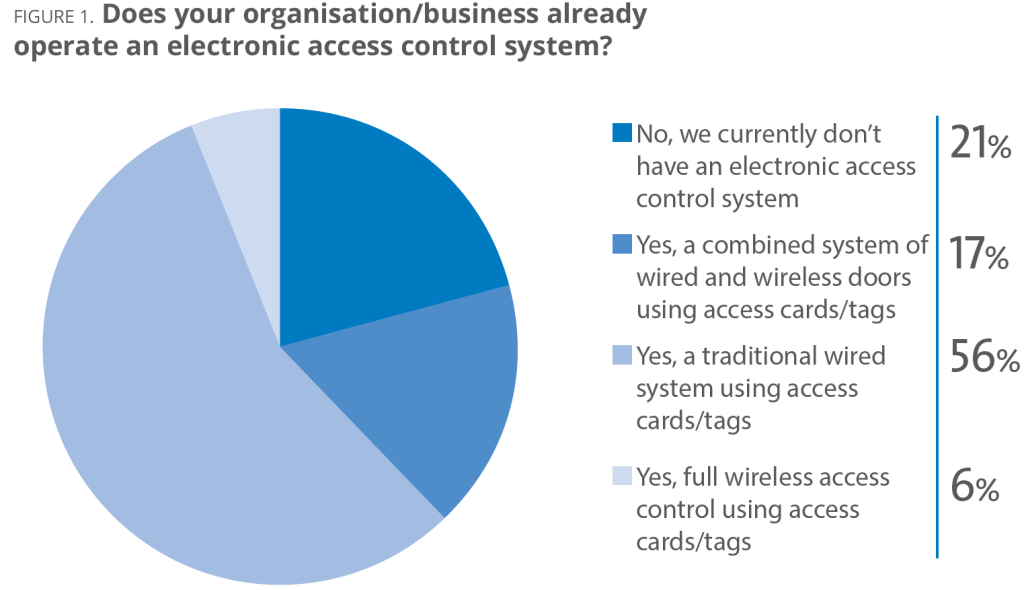 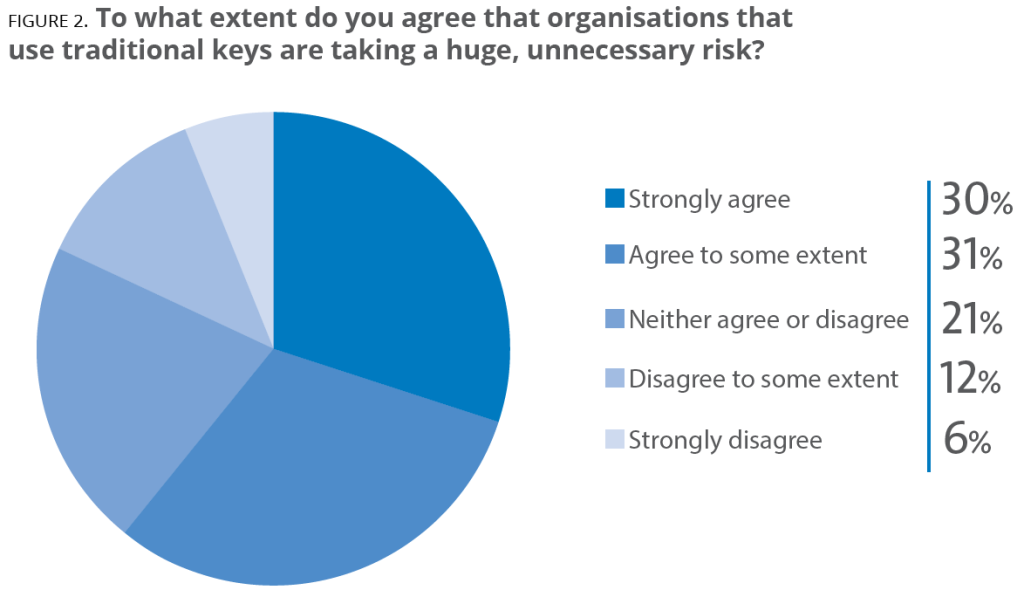 A mechanical master key system is expensive to run, because of its inflexibility in changing access rights and secure key management costs. Losing a master key means replacing mechanical cylinders and keys right across your facility. There’s no shortcut. With an access control system, it takes a few seconds to issue or revoke cards, from a computer or a smartphone. You can monitor and manage your premises, at any time of day or night. Reprogramme an RFID card and you have a new key—instantly.

There are so many myths about what wireless locks can and can’t do. Potential is huge, but the market is suffering from some serious misconceptions.

What about the fact that wireless locks are not secure?
Only around one in five businesses currently enjoys the benefits of wireless access control. Why? In the trade-off between convenience and security, the latter must always prevail—and another statistic may explain a reluctance to upgrade. Eighteen percent of those with wired systems, or no electronic system at all, think wireless access control systems are less secure than wired access control. Those who already use wireless systems are surely better placed to judge their qualities.

Wireless products across the industry now have the certification required for all kinds of higher security doors, both interior and exterior 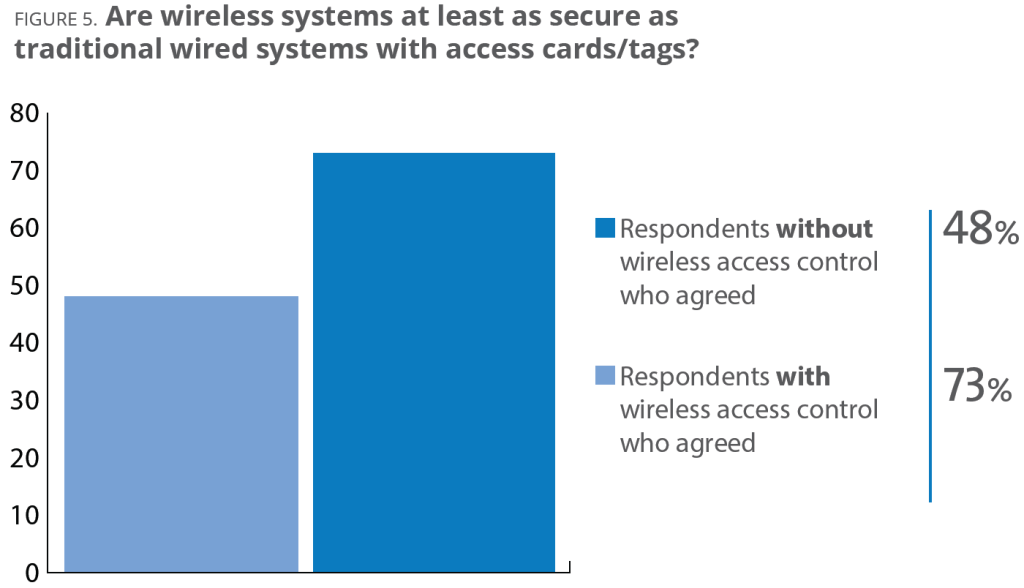 Another myth: there are CE and EN certified, or even fire-rated products available, including for security doors. The vast majority of those polled agree that access control is more secure than traditional keys.  “Wireless products across the industry now have the certification required for all kinds of higher security doors, both interior and exterior,” explains Chris Bone. “For example, the ASSA ABLOY Aperio® Premium Escutcheon meets the standard required for fire and escape doors in schools, stadiums and other public buildings.”

Four respondents in five (79%) believe that the adoption of electronic access control by small businesses, and even households, will soar in the next few years. 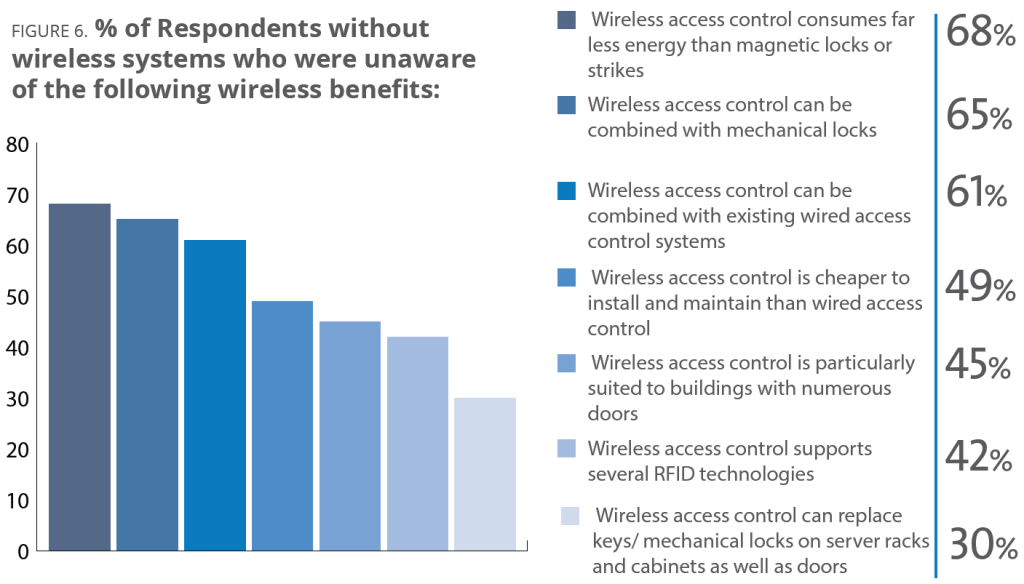 Further, 68% of those not using wireless products are unaware that they consume far less energy than magnetic locks or strikes. Nearly half of the same group are unaware of the following benefits of wireless access

control too: that it is generally cheaper to install and maintain than wired control (49%); that it is suited to buildings with numerous doors (45%); and that it can support multiple RFID technologies (42%). More knowledge gaps.

Many of those using exclusively wired systems are also unaware of the versatility of wireless access control, including such applications as replacing mechanical keys on server racks and cabinets (30%) and—the biggest proportion of all—its potential for combined deployment alongside mechanical locks (65%). 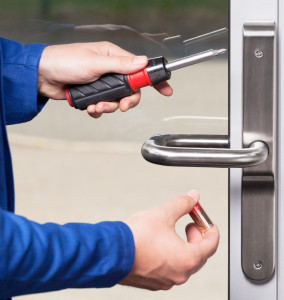 Around a third of our respondents using wired access control had no idea that wireless systems use much less energy.

Because wireless locks are battery powered and only “wake up” when a credential is presented, they consume a tiny fraction of the power used by always-on wired mag locks.

And battery life? Not a problem—that’s another market myth shared by close to 100% of our research group, who expected wireless lock batteries to drain too quickly. In fact, our own Aperio® or SMARTair™ locks run for approximately 2 years on a new battery.

The IFSEC Global survey suggests that facilities managers, installers and integrators are less likely to encounter problems with wireless access control. Fifty-seven percent of those who use or install wireless access control say they have no problems with their current system, against 43% who use traditional wired systems. The biggest gripes are that wireless systems are complicated and expensive to install (21%) and expensive to maintain (14%). 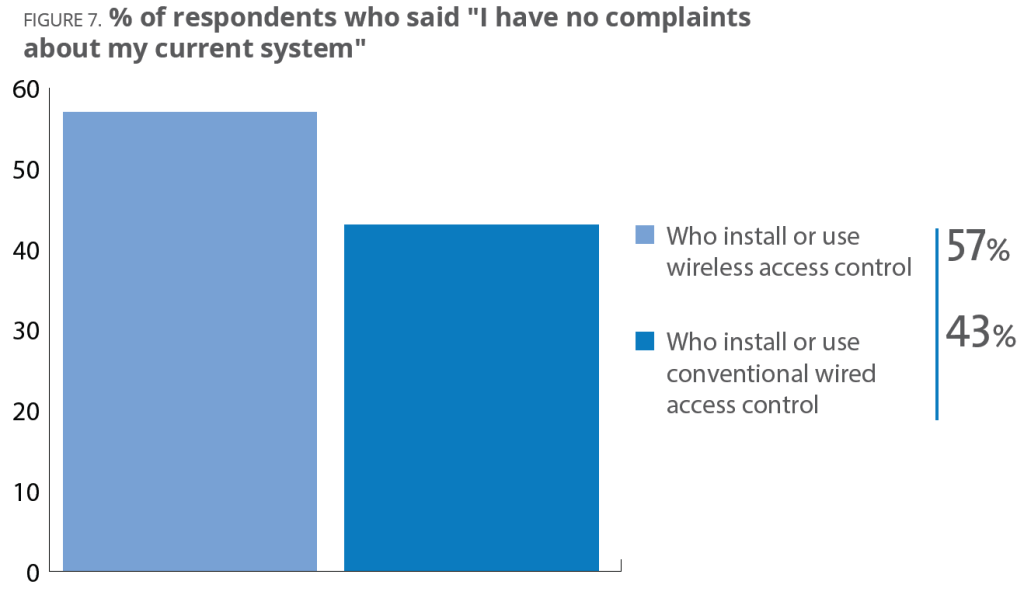 But that need not be the case. Because wireless products require no cabling, businesses don’t need expensive electricians to install or extend an access control system. “We posted a video on YouTube of a technician installing one of our Aperio cylinders,” explains Chris Bone. “The whole installation process is completed in one minute, 58 seconds.”

Stay tuned to the Future Lab for more insights in wireless technology from Chris Bone soon. 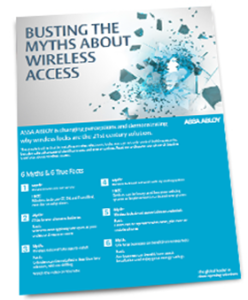 The survey at a glance: 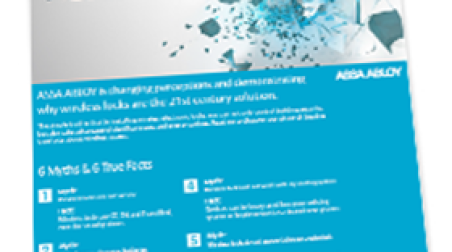 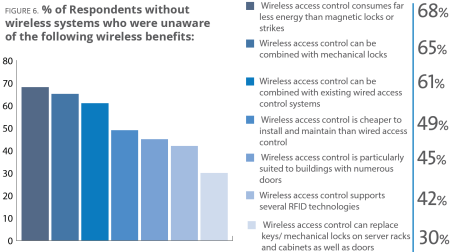 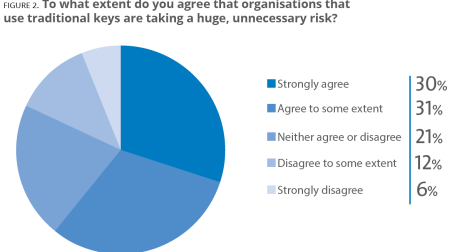 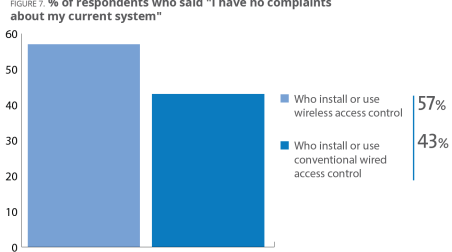 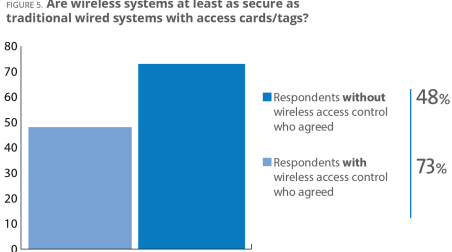 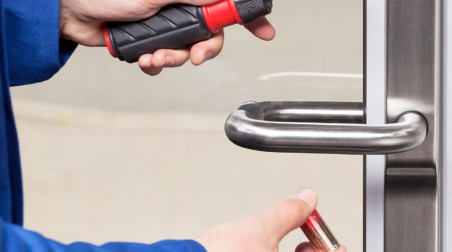 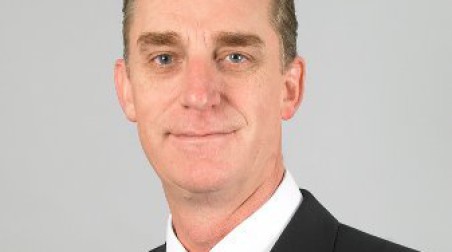 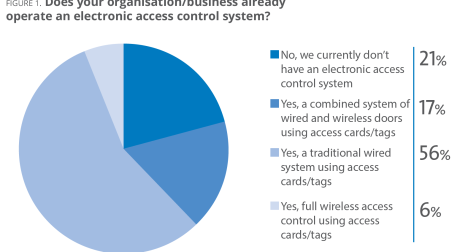