Can you imagine locking or unlocking a door simply by touching the doorknob? Or being able print a document by placing one hand on the copy machine and the other on your laptop? It may sound like science fiction but is actually a very real possibility thanks to a new close-range communication technology called RedTacton. First developed by Japanese NTT (Nippon Telephone & Telegraph) in 2005, the new technology takes wireless communication a step further by replacing the radio waves used for transmission over Bluetooth, IR and similar technologies with the minute electrical field emitted by the human body.

NTT claims the invention heralds the dawn of Human Area Networking (HAN), a network where communication takes place via RedTacton transceivers embedded in devices like PCs and cameras, and in tags carried in, for example, the user’s pocket. The connection is not initiated until he or she physically touches two different RedTacton-enabled devices, say, a laptop and a printer. Calling it an “intuitive and natural” technology, NTT points out that any human movement – be it touching, gripping, sitting, walking or stepping – can serve as triggers for unlocking or locking, starting or stopping equipment, or obtaining data.

Automatic identification
To the security industry, the technology paves the way for a new breed of access control systems that are not based on remote controls or access cards that rely on radio waves that could be interfered with. The technology uses a transmission path established between the body of a person carrying a RedTacton card key and a RedTacton transceiver installed in, for example, a doorknob or floor. The person is automatically identified when they touch the doorknob or walk on the floor, and the transmission path is disconnected when the body and transceiver physically separate.

Based on this technology, NTT and Hitachi have developed a human-identification system that could be used for security applications, while a lock company designed and manufactured the RedTacton-equipped doorknob.

Also, French security company Vachette is currently working on a wireless security and control system for private homes where the use of RedTacton would add a further touch of convenience and ease-of-use to the home owner. The company’s technical director Christian Pont explains: “Our preliminary tests show that RedTacton could be useful in motorized door locks. When you leave your home it is simply enough to touch the handle in order to lock the door. You don’t even need to push a button or use a remote control.”

Surface transmission
Instead of radio waves, RedTacton utilizes an electro-optic crystal that transforms electricity into data, achieving duplex (two-way) communication over the human body at the maximum speed of 10 Mbps. Scary as it may sound to use your own body as a communication device, NTT points out that the transmission never actually enters the skin but is merely carried across the surface, not exposing the user to more electricity than when speaking on a cell phone. In addition, the transceiver is covered with an insulation layer.

According to NTT another benefit of RedTacton – compared to transmission technologies using radio waves – is that transmission speed does not deteriorate in congested areas where many people are communicating at the same time. RedTacton is also said to be highly scalable for systems incorporating flapper gates, fingerprint biometric authentication devices, immersion-detection sensors or safety equipment.

Outside the office, RedTacton offers a host of communication options that might come in really handy. For example, it lets you transfer pictures from your camera just by touching the PC while the camera is around your neck. And since data can pass from one human body to another, you may also swap electronic business cards by shaking hands, trade music files by dancing cheek to cheek, or swap phone numbers just by kissing. 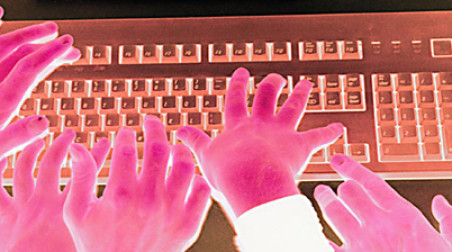