Beyond your current key

The key to home doesn’t have to be a key. Fobs, fingerprints and phones can all do the same job. There are plenty of options available on the market – and on the horizon. Which option appeals most to homeowners?

To get a better understanding of attitudes toward alternative residential credentials, ASSA ABLOY conducted surveys in countries across Europe and the Middle East. Respondents were asked for their opinions on non-traditional residential credentials including fobs, keypads, biometrics and near field communication (NFC).

Biometrics, through the use of a fingerprint or retina scan, emerged as the most futuristic option, with many respondents reporting they believe biometrics would be forgery proof. But questions were also raised about the efficacy of biometric scanners to work in extreme temperatures.

Frank Fourchalk is a security expert and columnist based in British Columbia, Canada. He also manages the website Yourhomesecurity.ca. Fourchalk confirms that biometric readers have a history of poor reading in colder climates. “The problem is the technology isn’t quite there yet,” he says.

They see it in movies and they think it’s kind of sexy and exciting.

“The North American homeowner has always been intrigued with biometrics,” says Jason Williams, general manager of Yale Residential. “They see it in movies and they think it’s kind of sexy and exciting. But, at the end of the day, it’s not giving you anything more valuable than a simple push button lock would give you. And it’s a lot less convenient because you have to enroll a user into it.”
That means, if your grandmother is coming to town unexpectedly, you can’t just “leave a key” for her. Instead, you need to enroll her fingerprint into the system – something which requires her presence in advance.

That said, Williams adds, it is far too early to write off biometrics for residential access control. “Right now, they’re more compatible with commercial locks. Cost and reliability are two critical factors. Maybe down the road, those curves will intersect and you’ll have a reliable, robust, biometric sensor that is also cost effective, but we haven’t seen that today.”

Keypads are often perceived as quick, easy-to-use, and convenient because they don’t require the user to carry a key or other device, all of which is popular with residential homeowners. But some common behaviors can lead to vulnerabilities.

“If you live in a condo or apartment building, for example,” says Fourchalk, “You might  tell your friends: ‘Type in 1-2-3-4 whenever you want.’”

A well-used keypad could even have numbers worn off, potentially revealing the access code.

Fobs are already a common access control device in many markets. Many drivers, for example, are now accustomed to locking and unlocking the doors of their vehicle with the push of a button. While many fobs used for access control require extremely close proximity, some respondents to ASSA ABLOY’s survey were intrigued by the idea of being able to open their door at a distance, in the same way they do their vehicles.

Many drivers, for example, are now accustomed to locking and unlocking the doors of their vehicle with the push of a button.

Concerns about fobs for residential access included the problem that, much like a traditional key, a fob can be lost or stolen. From a convenience standpoint, some users were not keen on having to dig around in their bags or pockets to find a fob, just like a key.

While NFC (Near Field Communication) technology was the least known among the general public, it was also regarded as an upcoming trend.

“With NFC, you have a very easy way to get access control,” says Williams. “You just need a phone and a door lock and you’re off to the races.”

NFC technology would allow residents to use their mobile phones to unlock the doors to their homes. Emerging software and platforms would also enable users to wirelessly send electronic keys to other NFC equipped phones.

”Call your service provider and they revoke the mobile keys very easily.”

Fourchalk praises NFC for its convenience. “NFC technology is going to make biometrics look like a dinosaur,” he says. “Can you imagine: You forgot you left your stove on or something, you’re at work, but you can send your next door neighbor a key?”

But where respondents, who are unfamiliar with how the technology works, expressed hesitation was with the possibility that an NFC-equipped phone, complete with its digital keys, could be stolen.

Yale Residential, in cooperation with Korea-based iRevo, has recently developed and launched the Yale Doorman NFC lock. “The overall security of NFC is one of the first issues people bring up,” says Williams. “But if you look at all the benchmarks of a regular key, you’re going to have the same issues with people potentially taking them. The difference is, with NFC, we can counteract that theft. It’s like losing your credit card: You call the company and they make sure no one can use it. With NFC, you would do the same thing: Call your service provider and they revoke the mobile keys very easily.”

As with other sensitive applications that people may currently have on their smart phones, users may also choose to add additional layers of security, such as passwords.

Fourchalk downplays the potential security issues around NFC as the natural “bugs” that will need to be worked out of the system before it takes off.

“If you have a maid who comes in at the same time and day, you can give that person access during that specific period”

“The technology is there, we’ve got it, we’re going to fine tune it and address some of those issues, but the technology itself, the idea of it and the whole process, is the best thing I’ve seen coming down the pipe,” he says.

Down the road, Williams envisions a platform that will allow NFC users to view their access history and set schedules. “If you have a maid who comes in at the same time and day, you can give that person access during that specific period,” he explains. “Not only is that convenient, it’s a big security plus as well.”

NFC may be emerging as the favored option for residential access control, but when can homeowners expect to see NFC solutions on store shelves?

“What we need is the availability of the NFC phones,” says Williams. “There are a handful that have been released but I predict that, in the next 12 to 18 months, you’ll get an influx of phones in the market place. In 2013, this will still be an early-adopter technology.”

“We need that phone technology to be ubiquitous. But, for the younger generations coming up, the ones who have grown up with cell phones and texting, NFC is going to be massive. They will have no qualms about opening doors with their phones. That’s when this is going to hit critical mass.” 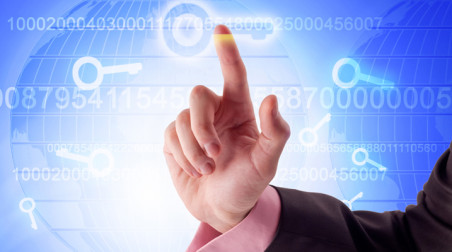