Public facilities such as museums and libraries have the complex task of being open and accessible to the public while at the same time protecting priceless objects. It’s a tricky balancing act which only works if the right tools and training are in place.

At the Walters Art Museum in Baltimore, Maryland, Greek and Egyptian treasures share space with European and American masterpieces in a collection visited by about 180,000 people a year. The museum’s goal is to be as open as possible. “It’s a survival issue,” says the museum’s Safety and Security Manager, Chris Kunkel. “If museums don’t open their doors to the general public, then they won’t be around in the future.”

At the same time, he acknowledges that openness combined with the task of protecting a collection against theft and damage is “the single most difficult challenge in museum security.”

Curators want visitors to be able to get close to an object but that, says Kunkel, “sends goose bumps up my back!” He prefers to put precious objects under lock and glass, or have partitions to stop people from getting too close to objects.

It’s a similar situation at Stockholm Sweden’s National Historical Museum, which houses a “gold room” containing gold and silver objects from the pre-historic to the middle ages. The room resembles a bank vault and was excavated underneath the museum in 1994.

“You have to protect them against theft and temperature changes – but you also have to display them. With the gold room we found that balance.”

Prior to the room’s inception, there had been numerous gold and silver thefts from Swedish museums and Stefan Anderberg, head of security says that as a result, museums tucked away their valuables in safes and basements. “These objects belong to everyone and you can’t have them locked and hidden away,” says Anderberg. “You have to protect them against theft and temperature changes – but you also have to display them. With the gold room we found that balance.”

The National Historical Museum has specially constructed display cases with steel frames, high-security glazing and locking systems. It also has an electronic alarm system, electronic high-security locks on doors and CCTV surveillance, but one of the most important factors says Anderberg is the ability to react to electronic security. “Whatever buys us time in the case of a theft or incident is very important so we can take quick measures.”

A CCTV system integrated with the alarm system has given the Walters Museum the ability to get early information about incidents and respond quicker says Kunkel. “When a motion sensor picks up something, for example a change in pixilation if a statue is moved, the software immediately sends an alarm to the operator in the monitor room.”

In addition to alarms and cameras, art storage areas all have access control points with card readers that electronically keep a record of comings and goings. Kunkel says the technology has had a major impact on how the museum handles security and safety, especially in these times of financial restraint and staff cutbacks.

“We are forced to really rely on our technology and tie it into how we use our cameras and security staff in conjunction with each other. We’re interested in any technology that makes it easier to do our job with less manpower and less cost, for example, the ability to inexpensively monitor activity or maintain the right temperature and humidity in displays.”

Both security professionals agree that staff training and education is critical to maintain open, yet protected museums – and that training should extend to all personnel.

When the Walters Museum stopped charging admission a few years ago, it increased attendance by 25 percent and opened the museum up to an even wider public. However, theft and vandalism did not rise as anticipated, says Kunkel, mainly due to increased training and awareness among all staff.

As a result of the increased openness of the museum, security officer training became more customer-service oriented. “Simply acknowledging people sends out a warm, friendly message to the visitor and it also says ‘I’m watching you’ to the potential bad guy,” Kunkel points out.

“We monitor the movements of our staff through keycards and CCTV systems and if they are working with the objects we make sure that both the object and the person are traceable – up to a point of course.“

This human presence is increasingly important today as museums face new challenges and growing concerns such as vandalism related to ideological disputes and political activism. Anderberg anticipates an increase in organized crime targeting museum staff and their families, and the museum is working to prevent this. “We monitor the movements of our staff through keycards and CCTV systems and if they are working with the objects we make sure that both the object and the person are traceable – up to a point of course. You can’t have CCTV everywhere.”

The demands on museum security are constantly changing. “We are increasingly becoming risk managers,” says Kunkel who has been working in law enforcement for close to 40 years. “It used to be all about locks, burglar and fire alarms, but now it’s more about an entire risk assessment when it comes to security for staff, travel and transport of objects, information, protecting visitors and the building. There are more safety and security regulations today and the people who are funding us really want to be certain that we are competent to take care of all of these valuable pieces.” 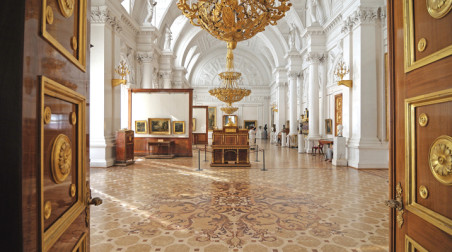