New technologies such as Advanced Imaging Technology and video analytics could help make long lines at airport security checkpoints a thing of the past.

As anyone who has shuffled along in line towards an airport security checkpoint with their shoes and phone in one hand and laptop in the other can testify, aviation security is getting increasingly stringent – and ever more time consuming. According to recent research by the US Travel Association, travelers’ top frustrations with air travel are the waiting time to clear the security checkpoint, and having to remove items of clothing. So airlines and airports are looking into technologies that can speed up the security process while making it more effective.

While the hijacking of aircraft flying between Cuba and the US in the 1950s and 60s led to the use of metal detectors, and Lockerbie led to the widespread use of x-ray equipment, the announcement in October of new full body scanners at 29 US airports came in response to the actions of the so-called underwear bomber who, in 2009, boarded a Northwest Airlines flight with a bomb concealed in his underwear.

The Advanced Imaging Technology (AIT) machines screen passengers for weapons, explosives and other objects concealed under layers of clothing. Today there are two types of AIT machines that use either electromagnetic waves or low-level X-rays to create images of the passenger’s body.

An important trend emerging in airport security is a move away from carrying out stringent security checks on all passengers to targeting those who raise suspicions. “The speed at which the aviation industry is growing worldwide makes it essential that we find a different way of screening people,” says Philip Baum, editor of Aviation Security International. “Treating everyone the same doesn’t make sense.”

The lane a passenger is directed to will be based on a biometric identifier in the passport or other travel document.

With this in mind, the International Air Transport Association (IATA) unveiled earlier this year its vision for a “checkpoint of the future”, designed to enhance security while reducing queues and intrusive searches. Passengers approaching the checkpoint will be directed to one of three lanes: ‘known traveler’, ‘normal’, and ‘enhanced security’. The lane a passenger is directed to will be based on a biometric identifier in the passport or other travel document. This will trigger the results of a risk assessment conducted by government before the passenger arrives at the airport.

The extensiveness of the security procedure will be based on how risky each passenger is judged to be, and low-risk passengers will pass through more quickly. This system will also incorporate a full-body screening technology that allows passengers to walk through the checkpoint without having to remove clothes or unpack their belongings.

“We spend 7.4 billion dollars a year to keep aviation secure, but our passengers only see hassle,” said Giovanni Bisignani, IATA’s Director General and CEO in a press release. “Passengers should be able to get from curb to boarding gate with dignity. That means without stopping, stripping or unpacking, and certainly not groping.”

While current technologies such as body scanners are designed to find bombs or weapons, the next generation will focus less on hardware and more on finding telltale signs of malicious intent in the behavior of would-be terrorists. Baum points out that while all passengers are subjected to security checks before boarding, only a few are targeted by Customs once they land. A similar approach, of targeting only passengers who raise suspicions through their behavior before they go through security checkpoints, could be a more effective way to find terrorists, while causing less inconvenience for normal passengers.

Who should be singled out for special attention? Technologies under development will give the task of scanning terminal buildings for suspicious behavior to cameras and sensors; so-called video analytics, or intelligent CCTV.

The Australian company iOmniscient has a solution that can spot a person walking in the wrong direction, loitering, or leaving a bag unattended. “It’s clever stuff,” says Baum. “Greater use of this kind of video and analytical solution is definitely one way forward.”

Passengers’ faces are scanned for thermal patterns that reveal anxiety – a powerful biometric that is difficult to conceal.

Baum also sees potential in the thermal polygraph technology being researched at Aberystwyth University in the UK, where passengers’ faces are scanned for thermal patterns that reveal anxiety – a powerful biometric that is difficult to conceal.

Another technology based on the fact that even the best-trained terrorists can be betrayed by their bodies comes from Israel. WeCU Technologies is developing a technology for identifying risky passengers that involves projecting images that only a terrorist would recognize and then monitoring with hidden sensors the effects they have, such as heart rate fluctuations and body temperature increases.

Although questions remain about the efficacy and validity of such technologies and they could still be years away, the prospect of a swifter and smoother passage to the gate in future should be of some comfort to those currently standing barefoot in line. 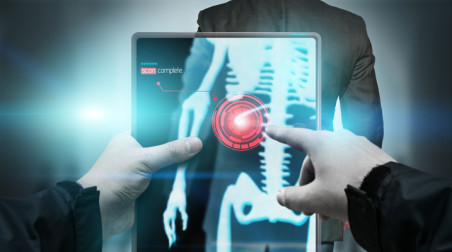